UPTON, NY - Scientists working at the U.S. Department of Energy's Brookhaven National Laboratory have developed a compact linear accelerator that uses laser light to accelerate electrons with better efficiency and energy characteristics than ever before. The experimental device, called Staged Electron Laser Acceleration (STELLA), is a step forward in accelerator development, and may help electron accelerators become practical tools for applications in industry and medicine, such as radiation therapy for cancer patients. 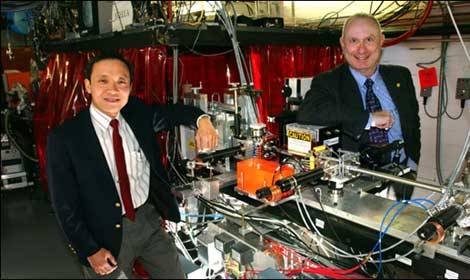 Electron accelerators use the motion of high-speed electrons for many applications, such as to produce x-ray and ultraviolet light. Standard accelerators work by transferring microwave radiation energy to electrons, causing them to accelerate down a long, straight pipe. But reaching high energies can be difficult with this type of linear accelerator, or linac, because the electrons receive only small bursts of energy at a time and are accelerated in several steps. As a result, high-energy linacs are usually several meters long and can be up to several kilometers in length. They are also very expensive. In contrast, over a distance of one-third of a meter, STELLA, which uses laser light rather than microwaves to accelerate electrons, shortened and improved the "step" method to achieve an energy gain that would have required a longer standard linac. The researchers were also able to overcome some of the challenges of using laser-driven linacs, such as making the electrons as monoenergetic, or equal in energy, as possible, and keeping them tightly bunched together. These characteristics are vital to producing a high-quality, useful electron beam. While laser linacs still need substantial development, STELLA's success in performing these tasks suggests that linacs could be much smaller and more affordable in the future, making them appropriate for radiation treatment areas in hospitals, for example.

"Laser accelerators hold significant future promise for compact, powerful accelerators, but we have a lot to learn until we can use them with the same dexterity as conventional machines," said Ilan Ben-Zvi, a Brookhaven senior physicist who worked on STELLA. "The achievement of STELLA is that it carried out functions that, before this date, could only be done by conventional linacs."

Physicist Wayne Kimura, STELLA's lead scientist and the Vice President of Research and Development for STI Optronics, Inc., a research company in Bellevue, Washington, agreed, saying, "STELLA's success has helped bring the dream of creating a practical laser-driven accelerator closer to reality. We have achieved a key step on the road to a new acceleration technology, but there are still many challenges ahead before we reach that goal."

The STELLA experiment was performed at Brookhaven's Accelerator Test Facility (ATF), where the researchers worked to significantly increase the energies of the electrons while preventing many of them from falling behind and forcing those that were accelerated to become monoenergetic.

According to Kimura, the situation is similar to a herd of sheep "accelerating" from one corral to another. If the sheep are moving at different speeds in a long, loose line, some are left behind when the rear gate closes and the front gate opens. After moving through several corrals, the herd would diminish to a fraction of its original size. But if the sheep move in a dense cluster, most will be inside each corral when the rear gate closes. When it comes to "herding" electrons, STELLA was able to keep the entire "herd" together better than any prior experiment.

"The STELLA experiment was a particularly challenging one because it pushed the frontier of both laser and accelerator technologies," Kimura said.

In the scientific community, the results from STELLA may help develop linear accelerators that can deliver higher energies than are currently possible using microwaves, without becoming unfeasibly long and expensive. "Our overall approach is a general one, which can be applied to other laser acceleration schemes," said Kimura. "Regardless of the acceleration mechanism they use, they still need to repeat the acceleration process over and over again - i.e. staging - in order to achieve a high final energy. The approach we used to achieve efficient staging with monoenergetic acceleration should be adaptable to these other schemes."

The experiment was done in collaboration with researchers at STI Optronics, Inc., Brookhaven National Laboratory, the University of California at Los Angeles, Stanford University, and the University of Washington. It was funded by the U.S. Department of Energy's Office of High Energy Physics within the Office of Science.

In the experiment, the electrons entered STELLA with an initial energy of 45 million electron volts (MeV), having been previously accelerated with a standard linac at the ATF. Then, the electrons were directed into an inverse free electron laser (IFEL), a device that uses a series of powerful permanent magnets to force the electrons to "wiggle" in a wavy path, causing them to emit tiny bursts of light energy called photons. Simultaneously, a laser beam was sent through the IFEL, essentially lying on top of the electrons. The laser regulated the electrons' energy by "donating" photons to the slower electrons and "taking" photons from the faster ones. As a result, the slow electrons caught up with the fast ones and grouped together to create little packets, or microbunches, each with a length of a millionth of a meter. This is one of the shortest microbunches ever created: a significant achievement because it makes it possible to accelerate the electrons without leaving many behind. Additionally, the microbunches were separated by just 10.6 millionths of a meter, a distance equal to the wavelength of the laser beam.

The microbunches then traveled into a second IFEL, where they were accelerated by the laser beam to a higher energy while staying tightly grouped. This process is the essence and most difficult part of the experiment. However, the researchers were able to accelerate the microbunches without leaving behind a large number of strays: Up to 80 percent of the electrons were held, or "trapped," in the microbunches. Moreover, STELLA recorded an energy gain of 20 percent, accelerating the electrons from 45 MeV to more than 54 MeV. The trapped electrons were also quite monoenergetic: More than two-thirds stayed within 0.36 percent of 54 MeV.