SPIE - The Technology Achievement Award recognizes outstanding accomplishments in optical, electro-optical, or photonic engineering technology. The recipient shall have contributed significantly to the advancement of these technologies with a specific demonstration of optical technology in a new system or application and its reduction to practice. 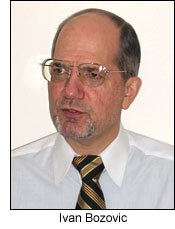 Ivan Bozovic, Brookhaven National Laboratory, USA, is the recipient of the 2004 Technology Achievement Award for constructing a next-generation molecular beam epitaxy oxide system and for developing a technology to deposit atomically smooth films and multilayers of complex oxides.

Bozovic is a leader in the field of epitaxy and nano-engineering of complex oxides, and is also renown for his optical and Raman spectroscopy results. His research accomplishments include the construction of an unparalleled next-generation molecular beam epitaxy oxide system, integrated with a 16-channel atomic absorption spectroscopy system for accurate real-time monitoring of atomic fluxes, as well as a low-energy electron microscope and a time-of-flight ion scattering and recoil spectroscopy system for in-situ, real-time, atomic-level monitoring of the film surface. Leveraging on this breakthrough in the apparatus, he has developed a technology to deposit atomically smooth films and multilayers of complex oxides. He accomplished these and many other innovations in both the academic and industry arenas.

"Through the years I have been continually impressed with Ivan's knowledge, drive, and creativity in solving a multitude of research problems," says Michael S. Osofsky of the U.S. Naval Research Laboratory.

Bozovic has published more than 160 research papers, 10 books, and has been cited more than 4,000 times. He is a Fellow of both SPIE and the American Physical Society, and has won the highest Yugoslav national award in physics, the M. Jaric Memorial Prize, Polaroid International Prize, and several other awards. Bozovic has chaired eight SPIE conferences on superconductor physics and has served on many advisory and editorial boards in Europe and the United States.