UPTON, NY - The Relativistic Heavy Ion Collider (RHIC) at the U.S. Department of Energy's Brookhaven National Laboratory has established a new machine record for heavy ion luminosity, well above its previous performance. Luminosity is an extremely important measure of a colliding-beam accelerator's performance.

Exceeding all expectations of the 1,000-plus international physicists working at RHIC, the record-breaking luminosity, or rate of particle interactions, was set during the most recent experimental run using gold ions, which lasted four months, from December 2003 until April 2004. 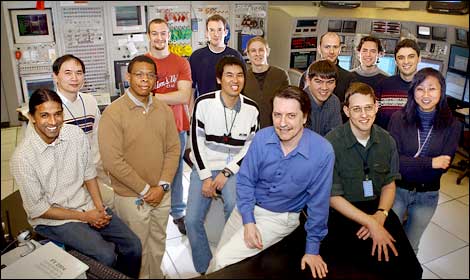 "The record luminosity performance is a direct reflection of the expertise of the designers, builders and operators of RHIC. This tremendous achievement supports the fact that Brookhaven's Collider-Accelerator Department ranks with the best accelerator organizations in the world," said Derek Lowenstein, chair of the Collider-Accelerator Department (C-AD), which operates a suite of facilities for accelerator-based experiments hosted by the Laboratory.

Funded by the U.S. Department of Energy's Office of Science and commissioned in 2000 as the world's highest energy heavy-ion collider, RHIC has so far run four times, with each period of operation lasting several months. During three of the four runs, including the one just completed, two beams of gold ions traveling in opposite directions at near the speed of light have been smashed into each other. The goal is to recreate what is called quark-gluon plasma, an extremely dense state of matter thought to have last existed microseconds after the Big Bang.

This graph shows the very sharp rise in the luminosity of the gold-ion beam collisions delivered to the four experiments PHENIX, STAR, BRAHMS, and PHOBOS at the Relativistic Heavy Ion Collider, during the run of fiscal year (FY) 2004, and in contrast to the runs of FY 2001-02 and FY 2000. In FY 2000 beams collided at 65 GeV/u (100 billion electron-volt per nucleon), in the later two runs at 100 GeV/u.

Analyses of data from the earlier runs indicate that RHIC is, indeed, producing an extremely dense form of matter that has never been seen before. Whether or not it is the long-sought plasma of quarks and gluons freed from their confinement within the atomic nucleus remains to be determined. To make such a determination, experimenters need as much data on the events coming out of RHIC's gold-beam collisions as possible. So, the higher the rate of RHIC's particle interactions, the more data coming out of those collisions to support the quark-gluon plasma search.

Given the record-setting luminosity and its contribution to the run's success, "RHIC's experiments may nail it this time," says accelerator physicist Thomas Roser, who is responsible for RHIC operations within C-AD. "I believe that either quark-gluon plasma will be found to be there within the expected energy range, or something even more interesting and unexpected will appear."

In the world of high-energy and nuclear physics, energy and luminosity are the two major parameters defining the performance of a colliding-beam system such as in RHIC. The higher the kinetic energy of the particles and the greater the luminosity of the beam, the better because of the greater likelihood that unusual events will be detected and new physics - such as quark-gluon plasma - will be discovered.

Given the relationship between energy and speed, the higher a particle's speed, the greater its energy, and, just as with most colliding objects, the greater likelihood that a head-on collision between two particles will cause them to eject other particles. Traveling nearly as fast as possible, which is the speed of light, RHIC's particles each have an energy of 100 billion electron volts (GeV) per nucleon (proton or neutron) within the gold nucleus. This equals 200 GeV at the collisions' center of mass, or a total available energy of 40,000 GeV from all the gold nucleons present.

Instantaneous luminosity is a measure of the number of particle collisions per second. So, the more particles are packed into a smaller beam area the better because of the greater likelihood that particles will collide each second. The more reliably a high-luminosity collider operates, the more particle interactions over time it can produce.

In setting the new record, RHIC is now delivering routinely twice the luminosity called for in its design. As a result of its three gold runs over the past four years, RHIC has increased its delivered luminosity per run almost 200-fold. The majority of this improvement, however, came during the most recent gold run.