George Saliba to Give a Talk at Brookhaven Lab on Science in Renaissance Europe, August 19 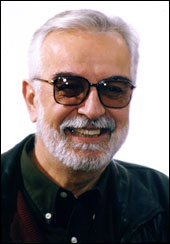 Upton, NY - Columbia University Professor George Saliba will give a BSA Distinguished Lecture titled "Whose Science is Arabic Science in Renaissance Europe?" at the U.S. Department of Energy_s Brookhaven National Laboratory on Thursday, August 19, at 4 p.m. in the Laboratory_s Berkner Hall Auditorium. BSA Distinguished Lectures are sponsored by Brookhaven Science Associates, the company that manages Brookhaven Lab, to bring before the Laboratory community and the public topics of general interest. All visitors to the Laboratory age 16 and over must bring a photo ID.

In his lecture, Saliba will investigate the relationship between Arabic/Islamic science and that of Renaissance Europe, especially in the fields of planetary theories and mathematical astronomy. Using manuscript evidence from Arabic and Latin sources, the talk will concentrate on the manner in which scientific ideas crossed cultural, linguistic and religious borders. By focusing on one case of this intricate transmission of ideas, Saliba will illustrate the inaccuracy of labels such as Arabic, Latin, Western or Greek to describe scientific activities that do not fit comfortably within such designations.

Two specific points will be made in the lecture: First, Arabic/Islamic science was not a continuation of Greek science, but in the field of astronomy in particular, it harbored a genuine rebellion against the Greek legacy. Second, the European Renaissance was not an attempt to recover Greco-Latin antiquity; rather it was an attempt to incorporate the latest findings of Arabic/Islamic astronomy into Renaissance science.

After becoming a visiting professor at New York University and Columbia University, Saliba joined the faculty at Columbia in 1979, where he has become Professor of Arabic and Islamic Science. Saliba has been the recipient of numerous awards, fellowships and honors. He was elected Fellow of the National Humanities Center, 1997-1998, and he won the Kuwait Foundation for the Advancement of Science Prize for Arabic/Islamic Heritage - Astronomy, in 1996.