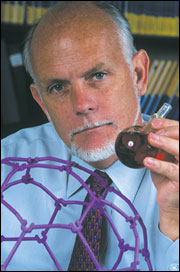 Upton, NY - Richard E. Smalley, winner of the 1996 Nobel Prize in Chemistry for the discovery of a structure of carbon atoms known as a "buckyball," will give a series of two lectures at the U.S. Department of Energy's Brookhaven National Laboratory. On Tuesday, October 19, at 4 p.m., Smalley will present a lecture on "Our Energy Challenge," and on Wednesday, October 20, at 11 a.m., he will speak about "The Brave New World of Buckytubes." Sponsored by Brookhaven Science Associates through the George B. Pegram Lectureship Series, in which distinguished scholars examine topics of both scientific and general interest, the lectures are open to the public and will be held in the Laboratory's Berkner Hall. Visitors to the Laboratory age 16 and over must bring a photo ID.

In his first lecture on October 19, Smalley will explore the difficult problem of supplying the world with energy in the 21st century and beyond. In order to maintain adequate energy supplies for the world's expanding population, scientists will have to find a new, economical energy source that can provide at least 10 terawatts (TW) of clean power on a sustainable basis. To achieve and sustain a modern lifestyle for the billions of people in the developing world, 50 TW of clean power would be needed.

How will we get the 10 to 50 TW of new power? How will we transport this energy, store it, and transform it? Can the new energy be discovered and used soon enough to avoid the hard economic times, terrorism, war, and human suffering that is likely to occur as we fight over the dwindling oil and gas reserves on the planet?

Energy may very well be the single most critical challenge facing humanity in this century, and Smalley believes that nanotechnology will be the key to solving it. Nanotechnology - technology executed on the scale of billionths of a meter - makes possible the creation of materials with new properties, perhaps leading to new ways to make, transmit and store energy.

In his October 20 lecture, Smalley will discuss "buckytubes," elongated buckyballs that are essentially a new high-tech polymer that can conduct electricity. Experiments and theory have shown that these tubes can be either metals or semiconductors and, when made with molecular perfection, can exhibit revolutionary electrical, thermal and mechanical properties on the nanometer scale. In this lecture, Smalley will discuss the basic science underlying the exotic chemical and physical properties, as well as the methods of production, purification, analysis, and assembly of buckytubes for solving real-world technological problems.

Richard E. Smalley earned his bachelor's degree in 1965 from the University of Michigan and his master's degree in 1971, and Ph.D. in 1973, both from Princeton University, with an intervening four-year period in industry as a research chemist with the Shell Chemical Company. During his postdoctoral research years at the University of Chicago, Smalley pioneered a powerful technique in chemical physics called supersonic beam laser spectroscopy.

Smalley joined Rice University in 1976, and was named to the Gene and Norman Hackerman Chair of Chemistry in 1982. He was founder of the Rice Quantum Institute in 1979, and served as the chair from 1986 to 1996. In 1990, he became a professor in the Physics Department, and, in 2002, he was appointed University Professor. From 1996 to 2002, Smalley was founding director of the Center for Nanoscale Science and Technology at Rice, and he is now director of the university's Carbon Nanotechnology Laboratory. Smalley's research has led to the startup of a new company, Carbon Nanotechnologies, Inc., which is currently developing large-scale production and applications of buckytubes.

Besides receiving the Nobel Prize, Smalley has been honored with numerous professional awards including the 1992 Lawrence Award, the 1996 Franklin Medal, and the 2002 Glenn T. Seaborg Medal. He is a member of the National Academy of Sciences and the American Academy of Arts and Sciences.

For more information, call (631) 344-2345. The Laboratory is located on William Floyd Parkway (County Road 46), one and a half miles north of Exit 68 of the Long Island Expressway.