UPTON, NY - In the annals of chemistry, there are many examples of hydrogen atoms moving from metals to carbon atoms. But no one has ever directly observed the reverse reaction - hydrogen atoms moving from carbon to a metal - until now. Using lasers and time-resolved infrared spectroscopy, scientists at the U.S. Department of Energy's Brookhaven National Laboratory have captured the bond-breaking and making action. They describe their work in a paper posted online by the Journal of the American Chemical Society on October 19, 2005.

While the specific reaction the scientists studied was chosen primarily to address fundamental questions of chemical reaction mechanisms, it does demonstrate a new way of breaking carbon-hydrogen bonds - the first step in converting hydrocarbons into higher-value chemicals or fuels. 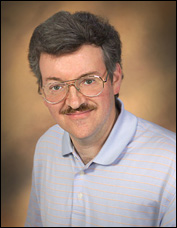 This project was initiated through Laboratory Directed Research and Development funding for Jie Zhang, a postdoctoral fellow conducting research in Morris Bullock's laboratory. Zhang devised new synthetic methods for the osmium complexes and showed that they had the desired photochemical reactivity. David Grills, who works with chemist Etsuko Fujita, carried out the measurements using laser flash photolysis and the step-scan infrared spectrometer in Fujita's lab. Kuo-Wei ("Andy") Huang, a Goldhaber Fellow working with Fujita, performed computations to help the team interpret the data. "This project involved a group of scientists, each with his or her own individual expertise, and could not have been successful without the contributions of all these people," Bullock said.

"Improving our understanding of these fundamental reactions will help us evaluate the feasibility of using such reactions in applications that might have practical utility," said Brookhaven chemist Morris Bullock, who leads the research team.

For many years, chemists have studied a variety of different types of metal complexes to find those that can break carbon-hydrogen bonds, and have succeeded in finding several that can accomplish such reactions. Some of the most carefully studied examples form bonds from the metal to carbon and to hydrogen at the same time through the interaction of a hydrocarbon molecule with a metal complex that can make additional bonds. But the Brookhaven team designed a system to remove a hydrogen atom from the hydrocarbon directly.

The scientists started out with a metal complex containing two linked atoms of osmium, a metal known to form strong chemical bonds, in a solution containing a hydrocarbon with a weak carbon-hydrogen bond (1,4-cyclohexadiene). By shining laser light on the metal complex, they were able to break the bond between the two osmium atoms, resulting in a new, highly reactive osmium complex with a vacant bonding site. The osmium atom in this complex was then free to "grab" a hydrogen atom from the nearby hydrocarbon, breaking its bond to a carbon atom and frming a new osmium-hydrogen bond.

The scientists intentionally designed these initial studies to cleave a relatively weak carbon-hydrogen bond, and their studies show that this reaction occurs with a fast rate. In ongoing research, one of their goals is to try to get related reactions to occur with stronger carbon-hydrogen bonds and to see how the rate changes as the bond that is broken becomes stronger.

They are also trying other metal complexes that form weaker metal-hydrogen bonds, to see what the limits are on when such reactions are still favorable enough to be observed.

The research was funded by the Office of Basic Energy Sciences within the U.S. Department of Energy's Office of Science, and by Brookhaven's Laboratory Directed Research and Development program.