Nobel Laureate Frank Wilczek to Give a Talk at Brookhaven Lab on 'The Origin of Mass and the Feebleness of Gravity,' April 21

UPTON, NY - Frank Wilczek, co-winner of the 2004 Nobel Prize in Physics, will give a BSA Distinguished Lecture titled "The Origin of Mass and the Feebleness of Gravity" at the U.S. Department of Energy's Brookhaven National Laboratory on Friday, April 21, at 4 p.m. in the Laboratory's Berkner Hall. BSA Distinguished Lectures are sponsored by Brookhaven Science Associates, the company that manages Brookhaven Lab, to bring topics of general interest before the Laboratory community and the public. All visitors to the Laboratory age 16 and over must bring a photo ID.

Einstein's famous equation E=mc2 asserts that energy and mass are different aspects of the same reality. The general public usually associates the equation with the idea that small amounts of mass can be converted into large amounts of energy, as in nuclear reactors and bombs. For physicists who study the basic nature of matter, however, the more important idea is just the opposite. Physicists strive to understand, in terms of basic concepts, how mass arises. In his lecture, Wilczek will explain how he has, in large measure, achieved this goal. He will also discuss the possibilities of new physical phenomena and explain why gravity is quite feeble. 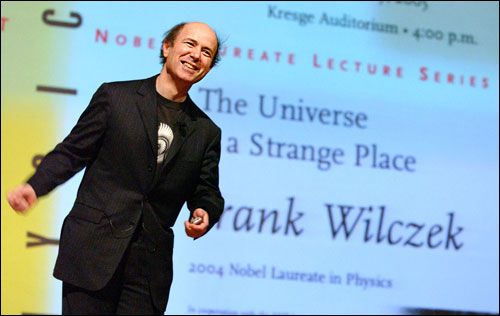 Frank Wilczek is considered one of the world's most eminent theoretical physicists. He shared the 2004 Nobel Prize in Physics with David J. Gross and H. David Politzer for the discovery of asymptotic freedom, a theoretical finding concerning the behavior of subatomic particles called quarks. The finding, reported in 1973, led to a completely new physics theory known as quantum chromodynamics.

After receiving a B.S. from the University of Chicago and a Ph.D. from Princeton University, Wilczek taught at Princeton from 1974 to 1981. He moved to the University of California at Santa Barbara, where he was the Robert Huttenback Professor of Physics until 1988. He then joined the Institute for Advanced Study as J.R. Oppenheimer Professor, and, in 2000, he came to the Massachusetts Institute of Technology, where he is the Herman Feshback Professor of Physics. Since 2002, he also has been an adjunct professor in the Centro de Estudios Cientificos of Valdivia, Chile.

Wilczek has received UNESCO's Dirac Medal, the American Physical Society's Sakurai Prize, the Michelson Prize from Case Western University, and the Lorentz Medal of the Netherlands Academy for his contributions to the development of theoretical physics. He contributes frequently to the scientific journals Nature and Physics Today, explaining topics at the frontier of physics to wide scientific audiences. Two of his pieces have been anthologized in Best American Science Writing (2003, 2005). He also co-authored a book, titled Longing for the Harmonies, with his wife, Betsy Devine.