Nobel Laureate Horst Stormer to Give a Talk at Brookhaven Lab Titled 'When the Electron Falls Apart . . . and What to Do with the Pieces,' May 4 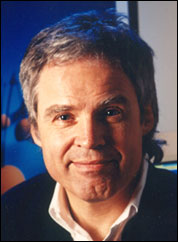 UPTON, NY - Horst Stormer, co-winner of the 1998 Nobel Prize in Physics, will give a BSA Distinguished Lecture titled "When the Electron Falls Apart . . . and What to Do with the Pieces" at the U.S. Department of Energy's Brookhaven National Laboratory on Thursday, May 4, at 4 p.m. in the Laboratory's Berkner Hall. BSA Distinguished Lectures are sponsored by Brookhaven Science Associates, the company that manages Brookhaven Lab, to bring topics of general interest before the Laboratory community and the public. The lecture is free, and no reservations are required. All visitors to the Laboratory age 16 and over must bring a photo ID.

Electrons are indivisible, as far as physicists know. In groups, however, electrons can fall apart and create smaller, fractional charges when squeezed onto a plane and exposed to a magnetic field. This phenomenon, known as the fractional quantum Hall effect, implies that many electrons, acting in concert, can create particles with a charge smaller than the charge of any individual electron - a counterintuitive effect, considering a collection of objects usually is bigger than its parts. Fractional charges are bizarre because, not only are they smaller than the charge of any constituent electron, but they are exactly one-third, or one-fifth, or one-seventh, etc., of an electronic charge, depending on the conditions under which they have been prepared.

Today, the evidence for such perplexing, fractional charges is direct, and scientists understand them in terms of an elaborate, quantum mechanical waltz of electrons. Stormer's lecture will provide an intuitive insight into this fascinating state of matter, present recent surprises, and finish with a speculated application of these weird particles.

Horst Stormer received his Ph.D. in physics from the University of Stuttgart in 1977, joined Bell Labs (now Lucent Technologies) as a postdoctoral student shortly after and became a technical staff member in 1978. From 1983 to 1992, he headed the company's Semiconductor Physics Research Department, and, in 1992, he became the Director of its Physical Research Laboratory. In 1997, Stormer became the Adjunct Physics Vice President at Bell Labs, and, in the same year, became a physics professor at Columbia University. In 1998, Stormer shared the Nobel Prize in Physics with Robert B. Laughlin and Daniel C. Tsui for the discovery of the fractional quantum Hall effect.