The following news release was issued by Rice University regarding work they will be participating in to add a time-of-flight system to the STAR detector at RHIC. The contact at Rice University is Jade Boyd, 713-348-6778.

With $5 million in new U.S. funding and a $2 million commitment from the Chinese Academy of Sciences, Rice University physicists are organizing the joint U.S.-Chinese production of an innovative set of detectors for one of the Department of Energy's (DOE) premier particle accelerators, the Relativistic Heavy Ion Collider (RHIC) at Brookhaven National Laboratory (BNL) on Long Island, New York. The project represents the most significant collaboration to date between the U.S. and China in high-energy particle physics detector research. 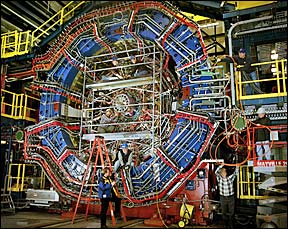 The STAR detector at the Relativistic Heavy Ion Collider.

Over the next three years, Rice physicists will manage an international team as it builds, installs and tests a cylindrical bank of more than 23,000 particle detectors in the Solenoidal Tracker at RHIC (STAR).

"Particle physics provides a clear example of the need for increased cooperation in science today because no single institution — indeed, no single nation — can afford the apparatus or command the expertise required to advance the boundaries of physical knowledge in this arena," said Rice University President David Leebron. "This program, which has been pursued with enthusiasm by Rice faculty, is an example of the most robust scientific cooperation, the type that emerges when scientists meet and collaborate on important areas of mutual interest and concern."

The program is managed by Rice's T.W. Bonner Nuclear Laboratory and involves dozens of researchers and technical workers at six U.S. and Chinese universities, three Chinese physics institutes and BNL.

"Physicists at the Bonner Lab first proposed a system like this 15 years ago, but the cost of the detectors alone was estimated at $12 million, so we went back to the drawing board and came up with a less expensive design," said lab director Billy Bonner, a co-principal investigator on the new DOE grant. "Without our Chinese partners, this new system wouldn't have been feasible. Their detectors are superior in quality to any of the prototypes we created, and their support and enthusiasm for the project are unparalleled."

RHIC is the most powerful heavy-ion collider in the world. At RHIC, gold atoms are stripped of their electrons and accelerated to nearly the speed of light in opposite directions along circular 2.4-mile tracks. When the beams collide, the protons and neutrons inside the gold shatter, giving physicists a brief glimpse of quarks, gluons and other basic constituents of matter.

The STAR Time-Of-Flight (TOF) detectors will tell physicists exactly what types of charged particles - including pions, kaons and protons — are created in these head-on smash-ups.

"We can see the charged particles and we can even track their flight path, but without knowing their flight time we generally can't tell them apart," said physicist Bill Llope, senior faculty fellow at the Bonner lab. With information from the STAR TOF detectors, physicists will be able to determine the mass of each charged particle emerging from the collision, hence determining the particles' identity.

The Multi-gap Resistive Plate Chamber (MRPC) detectors, which will be built in China, are constructed of seven panes of glass, each separated by a thin chamber filled with freon gas. When charged particles pass through the detectors, ionization dislodges electrons, and strong electric fields inside the MRPCs cause 'avalanches,' producing measurable signals. Sophisticated electronics, built at Rice, the University of Texas at Austin, the University of California at Los Angeles and Houston-based Blue Sky Electronics LLC, will pinpoint the time of the strike to within 100 trillionths of a second, and they will convert the information into digital signals that are recorded for numerous kinds of analyses.

"Producing the detectors is a huge undertaking, and the U.S. partners will wind up making more than 2,300 electronic boards for the system," said STAR TOF Project Manager Geary Eppley, a research scientist at the Bonner lab. "Assembly and testing will take place at UT Austin, and we'll install as many detectors as we can each summer when RHIC is shut down. We expect to finish in 2009."