Understanding the Chemistry of Ionic Liquids for Nuclear Fuel Reprocessing

SAN FRANCISCO, CA - With the rising cost and dwindling supply of fossil fuels, nuclear power may again be considered a plausible energy option in the U.S. Safety is the public's major concern, and researchers at the U.S. Department of Energy's Brookhaven National Laboratory are addressing one important aspect of that issue by investigating materials called ionic liquids. If these liquid salts were to be used in nuclear fuel reprocessing - the chemical removal of reusable nuclear material from spent nuclear reactor fuel - the risk of unintended nuclear chain reactions may be substantially reduced. 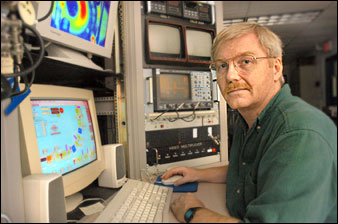 At the 232nd national meeting of the American Chemical Society in San Francisco, Brookhaven Lab chemist James Wishart will present his research on how ionic liquids containing the element boron react with radiation. His talk will be given at the Grand Hyatt Hotel's Dolores Room on Monday, September 11, at 3:20 p.m. Pacific Time.

Ionic liquids, which contain only electrically charged molecules known as ions, have several properties that make them attractive as an alternative medium for nuclear fuel reprocessing. These include low volatility, low combustibility, and resistance to being electrochemically oxidized or reduced. In 2001, researchers at DOE's Los Alamos National Laboratory calculated that reprocessing plutonium in boron-containing ionic liquids could substantially reduce the risk of nuclear accidents that involve unintended chain reactions. A particular isotope of boron can "poison" a chain reaction by strongly absorbing the neutrons that propagate the chain.

"Compared to current aqueous systems used for reprocessing plutonium, boron-containing ionic liquids can hold up to a hundred times more dissolved plutonium before reaching the critical threshold - that is, before the plutonium sustains a nuclear chain reaction," Wishart said. "Thus, there would be far less chance of an accident."

Brookhaven's Wishart and former postdoctoral researchers Tomasz Szreder and Alison Funston, with collaborators from the University of California, Riverside, have investigated the radiation chemistry of ionic liquids prepared from carborane and a boron-containing anion. They found that electrons ejected from molecules by radiation leads to decomposition of the carborane. To prevent this decomposition, the researchers propose including positively charged ions, like pyridinium, that can intercept the electrons before they react with the carborane. The reactions are reversible so the materials can be used over and over again.

"In U.S. nuclear power reactors, the fuel is only used once-through and a lot of energy remains in the spent fuel that is destined for disposal," Wishart said. "In the future, we may instead reprocess fuel to use in current reactors and in a new type of reactor now under development. We would extract more energy from the same amount of natural resources and produce less nuclear waste. Advanced reprocessing would also reduce long-lived radioactive waste. The ionic liquids that we study could be a better medium for reprocessing nuclear fuel and nuclear waste than the currently used media."

DOE's Office of Basic Energy Sciences within the Office of Science and Brookhaven's Laboratory Directed Research and Development Program funded this research.