Unlocking the Secrets of High-temperature Superconductors

DENVER, CO - Although it was discovered more than 20 years ago, a particular type of high-temperature (Tc) superconductor — material that conducts electricity with almost zero resistance — is regaining the attention of scientists at the U.S. Department of Energy's Brookhaven National Laboratory. Copper-oxide compounds, called cuprates, operate at temperatures warmer than traditional superconductors but still far below freezing. Understanding the mechanism for these superconductors may one day help scientists design superconductors able to function closer to room temperature for applications such as more-efficient power transmission.

Discovered in 1986, the most perplexing of these cuprate superconductors is "LBCO," named for the elements it contains: lanthanum, barium, copper, and oxygen. After years of research on similar materials, Brookhaven researchers have learned how to "grow" better samples of LBCO, which has allowed for extensive studies on its intriguing properties. Three Brookhaven physicists will discuss their most recent findings about LBCO at the March 2007 meeting of the American Physical Society. The details of their research are highlighted below. NOTE: The embargo date/time for each talk is specified after the title.

A Superconductor with Insulating Properties

One of the most perplexing findings involving LBCO is that the high-temperature superconductor actually has distinct insulating-like properties. Each barium atom has one fewer electron than lanthanum, so increasing barium adds electron "holes," or the absence of electrons, to the system. The more barium that is "doped" into the material, the more holes, and the greater the superconductivity — until the composition reaches a point where there is exactly one barium atom for every eight copper atoms, a state known as the 1/8 doping. Then, oddly, the superconductivity disappears. Above this point, as more holes (barium atoms) are added, the superconductivity reappears. 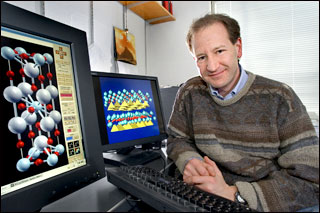 Brookhaven physicist Christopher Homes will discuss this odd phenomenon at 9:12 a.m. Mountain Time on March 5, 2007, in the Four Seasons Ballroom 2-3 at the Colorado Convention Center. At Brookhaven's National Synchrotron Light Source and other facilities on site, Homes investigates LBCO's electronic properties by shining various types of light onto an LBCO crystal and measuring the intensity that is reflected back. This optical picture tells scientists about the behavior of the charge carriers - or holes - in LBCO. Most materials have a set number of carriers that scientists can count using these methods. As a material becomes a superconductor, some of the holes lower their energy by falling into a superconducting state that allows them to flow without resistance. As these carriers condense, there is a characteristic change in the optical conductivity. However, even though LBCO is not a superconductor at the 1/8 doping, the number of holes still decreases at low temperature. Homes and other researchers attribute this feature to the formation of the so-called "energy gap." In semiconductors, the charge gap blocks the flow of current because of its isotropic nature (the gap spreads evenly in all directions). Superconductors also have energy gaps, but in the cuprates these gaps have different energies in different directions with respect to the copper-oxygen chemical bonds.

"The more we look at this charge gap, the more it looks like a superconducting gap," Homes said. "It has the same magnitude, the same shape and symmetry. Yet, it doesn't have superconductivity." Homes and other BNL researchers continue to tackle this mysterious problem in order to understand why a material that wants to be a superconductor is behaving like an insulator.

Looking for "Stripes" in High-Tc superconductors

In LBCO, as in all materials, negatively charged electrons repel one another. But by trying to stay as far apart as possible, each individual electron is confined to a limited space, which costs energy. To achieve a lower-energy state, the electrons arrange themselves with their spins aligned in alternating directions on adjacent atoms, a configuration known as antiferromagnetic order. As mentioned above, scientists can dope the material with electron "holes," or the absence of electrons, to allow the electrons/holes to move more freely and carry current as a superconductor. The question is: How do these holes arrange themselves? 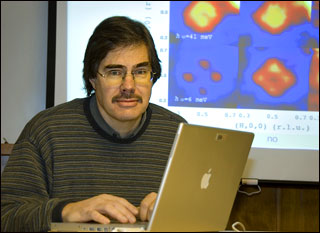 Brookhaven physicist John Tranquada will answer that question during his talk about superconducting "stripes" at 9:48 a.m. Mountain Time on March 5, 2007, in the Four Seasons Ballroom 2-3 at the Colorado Convention Center. Studies conducted by Tranquada and other Brookhaven researchers support the controversial theory that the holes segregate themselves into stripes that alternate with antiferromagnetic regions in the material.

"There's a lot of excitement in trying to understand why these materials are superconducting, and there's plenty of controversy surrounding it," Tranquada said.

Most recently, Tranquada's research group examined the effect of the stripes on vibrations in the crystal lattice. Lattice vibrations play a role in pairing up the electrons that carry current in conventional superconductors. At the Laboratorie Leon Brillouin, Saclay, in France, researchers bombarded samples of superconducting materials and the same stripe-ordered non-superconductor with beams of neutrons and measured how the beams scattered. Comparing the energy and momentum of the incoming beams with those scattered by the samples gives the scientists a measure of how much energy and momentum is transferred to the lattice vibrations. Each of these vibrations normally has a particular, well-defined frequency for a given wavelength. But in the superconductor experiment, at a particular wavelength, the scientists observed an anomaly: a wider range of frequencies in the lattice vibrations.

The scientists observed this anomalous signature most clearly in samples with observable stripe order, but they also saw it in samples of good superconductors without static stripes. This indicates the presence of dynamic stripes - meaning that the stripes can wiggle through the crystal lattice - and suggests that stripes might be important in the mechanism for high-Tc superconductivity, Tranquada said.

Paving the Way for Crystal Growth

In order to study the properties of LBCO superconductors, scientists need to produce large, single crystals of the material - a difficult task that wasn't possible until recently. At the state-of-the-art crystal growth facility in Brookhaven's physics building, physicist Genda Gu and his colleagues have perfected the process. Gu will discuss his crystal growth method at 11:51 a.m. Mountain Time on March 7, 2007, in Korbel Ballroom 1D at the Colorado Convention Center. 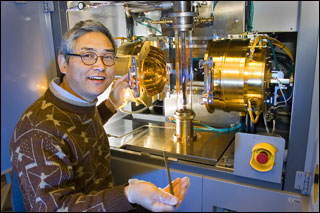 The crystals are grown in an infrared image furnace, a machine with two mirrors that focuses infrared light onto a feed rod, heating it to about 2,200 degrees Celsius (3,992 degrees Fahrenheit) and causing it to melt. Under just the right conditions, Gu and his colleagues can make the liquefied material recrystallize as a single uniform crystal. At present, the most interesting form of LBCO has one barium atom for every eight copper atoms, or a 1/8 "doping," at which point the material loses its superconductivity. Achieving this high barium concentration is extremely difficult and is the reason many scientists previously opted to use different but related materials for their research on superconducting stripes and other properties, Gu said.

"LBCO was the first high-temperature superconductor discovered, but everyone switched over to studying other materials for a while because they weren't able to grow single crystals with a concentration of barium greater than 11 percent," Gu said. "Now, we can study the whole class of high-Tc materials."

Each crystal takes about a month to make, with precise control over growth temperature, atmosphere, and other factors. Brookhaven is currently capable of making crystals with barium concentrations up to 16.5 percent, a world record, Gu said.

The research conducted by Homes, Tranquada, and Gu is funded by the Office of Basic Energy Sciences within the U.S. Department of Energy's Office of Science.