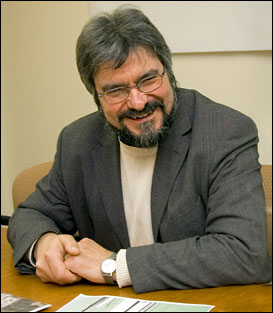 This summer, the staff at the National Synchrotron Light Source II (NSLS-II) will include Ferdinand Willeke, who has accepted the position of Associate Director for Accelerator Systems for the project. Together with Steve Dierker, Associate Lab Director for Light Sources, Willeke will oversee the design, construction, and commissioning of accelerator systems for the new facility.

Willeke comes to Brookhaven from Hamburg, Germany, where he has spent most of his career leading the activities at HERA, a large accelerator facility at the Deutsches Elektronen-Synchrotron (DESY). Born in Schwalbach, Germany, he studied physics at the Freie Universitaet Berlin, writing his Ph.D thesis on nuclear solid state physics.

He has experience working at national laboratories in the United States, having spent 18 months working on the Tevatron collider at Fermilab. He has also spent time at his new workplace.

"I am an old friend of Brookhaven," he said

Willeke served on various committees here, starting in 1992 with the RHIC Machine Advisory Committee, and also collaborated with BNL scientists on a special magnet for HERA in the late '90s. He is excited to begin work on the NSLS-II project.

"I am honored to join the NSLS-II effort," he said. "I'm looking forward to the challenges of coordinating the design and construction of this new facility, which pushes the state of the art. To build such a facility in a smooth way is certainly a challenge. It's a new experience for me, since I have worked with different types of accelerators in a different environment."

Having made several visits to BNL since agreeing to take the job, Willeke said he is "already in the middle of things," and is grateful for the warm welcome and support he has received.

"I am thrilled," said Dierker. "Dr. Willeke is an outstanding scientist and an able administrator. His leadership will be invaluable as we prepare to take another exciting step forward in accelerator science."

Despite numerous visits to Brookhaven, Willeke has seen little of Long Island aside from the Lab.

"I haven't had much time to explore," he said. "But Long Island is a nice area, and New York, while somewhat remote from Long Island, is an interesting city and certainly adds to the quality of life in the area. Exchanging Hamburg with New York is probably not a bad deal as far as cultural activities," he said with a smile.

Willeke's wife, Michiko Minty, is also a well-known accelerator physicist who has worked at both SLAC and DESY. She has also been offered a position at Brookhaven. The couple has a two-year-old daughter, Anja, who will be a newcomer at BNL's Child Development Center, which Willeke visited recently.

"There is a good spirit there," he said. "The children make a happy impression."