UPTON, NY - The Department of Energy (DOE) has granted "Critical Decision 1" (CD-1) status to the National Synchrotron Light Source-II (NSLS-II). This decision, which assures the facility's location at DOE's Brookhaven National Laboratory, is a major step forward in the long process to make this state-of-the-art research complex a reality. The world leading capabilities of NSLS-II will enable exploration of the scientific challenges faced in developing new materials with advanced properties. The resulting scientific advances will support technological and economic development in multiple sectors of the economy, from next-generation energy technologies to new drugs for fighting disease. 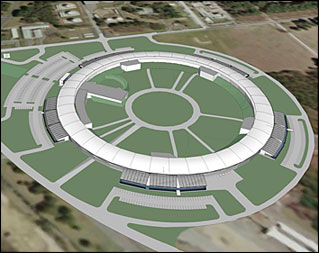 "This is wonderful news for New York State, for the U.S., and for researchers from around the world," said Brookhaven Lab Director Sam Aronson. "NSLS-II will be a stunning user facility, incorporating the most advanced technology to produce x-ray light 10,000 times brighter than the existing NSLS. It will also be a natural complement to our Center for Functional Nanomaterials, and will play a key role in advancing our nanoscience, energy, biology, and materials research."

NSLS-II will be a state-of-the-art medium energy storage ring designed to deliver world-leading brightness and flux. It will provide advanced tools for discovery-class science in condensed matter and materials physics, chemistry, and biology - science that ultimately will enhance national and energy security and help drive abundant, safe, and clean energy technologies. For example, major advances in energy technologies - such as the use of hydrogen as an energy carrier; the widespread, economical uses of solar energy; or the development of the next generation of nuclear power systems - will require scientific breakthroughs in developing new materials with advanced properties.

The combination of capabilities at NSLS-II will have broad impact on a wide range of disciplines and scientific initiatives in the coming decades, including new studies of small crystals in structural biology, development of nanometer-resolution probes for nanoscience, coherent imaging of the structure and dynamics of disordered materials, greatly increased applicability of inelastic x-ray scattering, and properties of materials under extreme conditions. Such a high-brightness light source will foster research in areas such as structural genomics and drug design. In the area of biological and medical imaging, NSLS-II will enable the extension of studies of early disease detection. NSLS-II will be the newest member of a suite of advanced light sources and neutron facilities operated by DOE's Office of Basic Energy Sciences that are used by more than 9,000 researchers annually from all disciplines.

NSLS-II's leading-edge ability to analyze materials will help guide the development of new materials at the Brookhaven Center for Functional Nanomaterials (CFN) that are expected to lead to transformational breakthroughs in the effective use of renewable energy through improved energy conversion, transmission, and storage. The CFN is one of five nanoscale science research centers (NSRCs) that the Office of Basic Energy Sciences is building and operating at national laboratories around the country. These centers provide scientific expertise and advanced instrumentation for creating new nanostructured materials. By locating the NSRCs next to DOE's light source and neutron facilities, the power of the world's finest experts and facilities for fabricating and characterizing advanced materials are brought together to accelerate the pace of discovery.

NSLS-II is part of the DOE Office of Science's strategic plan for facilities that was described in "Facilities for the Future of Science: A Twenty-Year Outlook (2003)." The original proposal for NSLS-II received the top science rating but required additional development before being ready to proceed, and so was ranked 21st out of 28 projects at the top of the "Far-Term" priorities. Since then, the proposal has been further developed and rigorous reviews have found the project ready to proceed much sooner than anticipated four years ago.

The NSLS-II project is supported by the Department of Energy's Office of Basic Energy Sciences. The CD-1 milestone (Approval of Alternative Selection and Cost Range) sites NSLS-II at Brookhaven and approves a proposed cost range of $750 to $925 million. Following approval of CD-0 in fiscal year (FY) 2005, the project received funding to complete a conceptual design for the facility. In FY 2007, the project received $25 million in funding, of which $22 million was for research and development activities and $3 million was for engineering design. The FY 2008 President's Request to Congress includes $65 million in funding for the NSLS-II project, with $20 million for continued research and development activities and $45 million for engineering design. The preliminary schedule calls for construction to begin in FY 2009 and operations to begin in FY 2015.

Steve Dierker, Associate Laboratory Director for Light Sources and Project Director for NSLS-II, said the planned facility will provide new, state-of-the-art tools that will enable the study of material properties and functions, particularly at the nanoscale, at a level of detail and precision never before possible.

The NSLS-II project will design, build, and install the accelerator hardware, experimental apparatus, civil construction, and central facilities required to produce a new synchrotron light source. It includes an electron injector and booster ring, a storage ring with a circumference of about one-half mile, experimental areas, and appropriate support equipment, all housed in a new building. The facility is being designed to meet requirements for energy efficiency and environmental stewardship, high reliability and availability for the user programs, and includes support facilities to ensure excellent scientific productivity.

NSLS-II is a major project that will employ hundreds of workers during the peak of construction. The organization includes a project support division that has established the management systems and infrastructure required to execute this complex undertaking, and three technical divisions - accelerator systems, experimental facilities, and conventional facilities - for each of the major areas of design and construction. Each of the four divisions is headed by a division director. Several advisory committees meet twice per year to provide broad perspective and expert advice, including an NSLS-II project advisory committee and three technical advisory committees, one for each of the three technical divisions. Each division is staffed with a range of specialty groups. While many of these positions are expected to be filled by existing Lab personnel, replacing those positions as well as filling others in the project with new employees will lead to a net increase of about 150-200 jobs at BNL during the construction project. When the new facility reaches full operations, it is expected to employ a staff about three times as large as that required to operate the present NSLS and will thus add several hundred new positions to the Laboratory.

NSLS-II will replace the existing NSLS, which began operations in 1982. NSLS provides essential scientific tools for 2,500 scientists each year from more than 400 academic, industrial and government institutions. Their myriad research programs produce about 800 publications per year, with more than 125 appearing in 'premier' journals, such as Science and Nature. For example, NSLS has been used by researchers to explain how a class of proteins helps to generate nerve impulses - the electrical activity that underlies all movement, sensation, and perhaps even thought. This work was awarded the Nobel Prize in Chemistry in 2003. It has also been used by researchers from IBM to develop materials processes required to use copper instead of aluminum in integrated circuit interconnects - leading to faster, lower power computer chips. The much higher brightness and flux of NSLS-II compared to NSLS will allow researchers to tackle the "grand challenge" scientific problems of the future.

CD-1 is the second of five critical decisions that the project will need to achieve in order to progress through the successively more detailed stages of conceptual design, preliminary design, final design, construction, and then operations. A CD-1 for a DOE scientific user facility construction project is only authorized following a rigorous review of the justification for a mission need for the facility, a management strategy for acquiring it, a detailed conceptual design of the facility, and an estimate of the cost and schedule for constructing it. A CD-1 is required prior to the start of project engineering and design efforts. A CD-1 does not guarantee eventual construction, however, and only represents the second step in project definition. The Department of Energy Order governing the construction process can be accessed at http://www.directives.doe.gov/pdfs/doe/doetext/neword/413/o4133a.pdf.