UPTON, N.Y. - The U.S. Department of Energy (DOE) has granted "Critical Decision 2" (CD-2) status to the National Synchrotron Light Source II (NSLS-II). This decision approves the facility's performance baseline based on preliminary design, signifying a major step forward in the process to make this state-of-the-art research complex a reality. CD-1, siting the facility at DOE's Brookhaven National Laboratory and approving its cost range, was announced in July 2007. NSLS-II will be a medium-energy storage ring with a unique design that will deliver world-leading brightness and flux and exceptional beam stability. 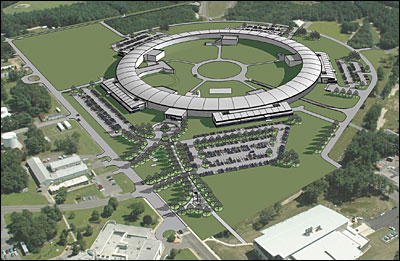 "NSLS-II will provide the world's finest capabilities for x-ray imaging, with unprecedented spatial and energy resolution and the ability to detect single atoms," said Steven Dierker, Associate Laboratory Director for Light Sources. "This will enable exploration of the scientific challenges faced in developing new materials with advanced properties, enabling their study, particularly at the nanoscale, at a level of detail and precision never before possible. The resulting scientific advances will support technological and economic development in multiple sectors of the economy, from next-generation energy technologies to new drugs for fighting disease. It will provide advanced tools for discovery-class science in condensed matter and materials physics, chemistry, and biology - science that ultimately will enhance national and energy security and help drive abundant, safe, and clean energy technologies."

NSLS-II will be the newest member of a suite of advanced light sources and neutron facilities operated by DOE's Office of Science that are used by more than 9,000 researchers annually from all disciplines. DOE has approved a total project cost for NSLS-II of $912M and a schedule that calls for construction to begin in Fiscal Year (FY) 2009 and project completion in FY 2015. The President's FY 2008 budget requests $65 million for the NSLS-II project, with $20 million for continued research and development activities and $45 million for engineering design. NSLS-II will replace the existing NSLS, which began operations in 1982. NSLS provides essential scientific tools for 2,300 scientists each year from more than 400 academic, industrial and government institutions.

CD-2 is the third of five critical decisions that the project will need to achieve in order to progress through the successively more detailed stages of conceptual design, preliminary design, final design, construction, and then operations. A CD-2 sets the total project cost and schedule. The DOE order governing the construction process can be accessed at http://www.directives.doe.gov/pdfs/doe/doetext/neword/413/o4133a.pdf.