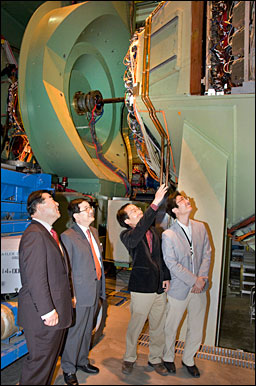 UPTON, NY — Professor Ki-Su Lee, President of Korea University, visited the U.S. Department of Energy's Brookhaven National Laboratory, in New York, on May 13, 2008. Professor Lee came to Brookhaven Lab, a premier science research center, to get a first-hand look at PHENIX, a massive detector used for physics experiments on the early universe. Professor Lee's visit highlighted the important contribution that the Korea Detector Laboratory (KODEL) of Korea University is making to enhance the performance of PHENIX. With special expertise in detector technology, KODEL is producing new components that will be installed in PHENIX over the next several years.

Under the leadership of Professor Lee, Korea University actively promotes innovative research and international relationships. A major proponent for global collaboration in research, Lee stated in his February 2008 inaugural address, "We have to embrace the globalization. Armed with practicality and renovation, we will reach out to set the global standards. To achieve that goal, we have to learn from the past and create new things."

PHENIX is operated by an international collaboration with over 500 scientist and engineers from 68 institutions in 14 countries. It is one of several experiments taking place at Brookhaven Lab's Relativistic Heavy Ion Collider (RHIC), where scientists investigate the nature of nuclear forces as they collide particles traveling at 99.9 percent of the speed of light.

KODEL will manufacture 200 state-of-the-art resistive plate chambers (RPCs) for PHENIX. RPCs are detectors that will be integrated into PHENIX. They are a result of an ongoing collaboration of scientists from several labs and universities worldwide since 1997. The new RPC detectors are expected to be installed and fully operational in PHENIX by 2011. 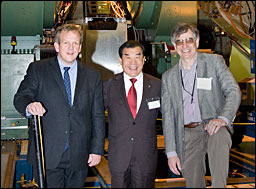 Under the direction of Korea University Professor Sung Keun Park, KODEL will use the same technologies to produce the RPC detectors for PHENIX as were developed to produce the forward RPC detectors in the Compact Muon Solenoid experimental apparatus at the Large Hadron Collider at CERN near Geneva, Switzerland.

The RPCs will enhance PHENIX's ability to probe the internal structure of protons. Protons have a substructure of quarks, anti-quarks and gluons. Gluons carry the nuclear force binding quarks and anti-quarks together to make protons and neutrons. The RPCs facilitate the selection of the rarest proton-proton interactions so that scientists can study the quark-anti-quark structure of the proton. These phenomena are essential ingredients in the processes that give protons their mass and their spin.

The PHENIX RPC project is funded by a grant from the National Science Foundation and managed by the University of Illinois at Urbana-Champaign under the guidance of UIUC Professor Matthias Grosse Perdekamp.

NOTE TO EDITOR: Professor Matthias Grosse Perdekamp and researcher Young Jin Kim, both at the University of Illinois at Urbana-Champaign (UIUC), are part of a collaborative physics project involving the University of Illinois, Korea University, and Brookhaven National Laboratory. The project is managed by UIUC under Professor Perdekamp. The following news release on the project is being issued today by Brookhaven Lab.