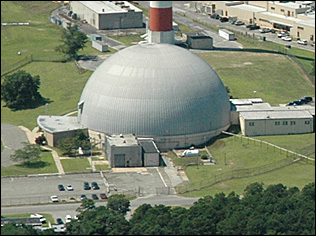 UPTON, NY - The U.S. Department of Energy (DOE), the U.S. Environmental Protection Agency (EPA), and the N.Y. State Department of Environmental Conservation (NYSDEC) have agreed on a final cleanup action (called a “remedy”) for the inactive High Flux Beam Reactor (HFBR) at Brookhaven National Laboratory (BNL). The agreement, known as a Record of Decision (ROD), describes the remedy for the HFBR and reflects significant community and regulatory agency input. The document is available at http://www.bnl.gov/hfbr and at Stony Brook University, Brookhaven Lab, and EPA libraries. The final remedy incorporates many completed interim actions, several near-term actions, and the long-term segmentation, removal, and disposal of the remaining HFBR structures, systems, and components, including the reactor vessel. In total, this work will cost an estimated $144 million.

The HFBR was a research reactor that operated at BNL between 1965 and 1996. Used solely for scientific research, the reactor provided neutrons for experiments in materials science, chemistry, biology, and physics. The HFBR complex consists of a domed reactor confinement building, several smaller ancillary buildings, and a 100-meter-tall red-and-white striped exhaust stack. During a routine maintenance shutdown in 1996, tritium was found in groundwater south of the reactor. Investigations revealed that the source of the tritium was a small leak in the pool where spent reactor fuel was stored. HFBR operations were suspended, and, in 1999, DOE announced it was permanently closing the reactor.

As a result of past operations, the HFBR complex contained approximately 65,000 curies of radioactive material — primarily iron-55, cobalt-60, nickel-63, europium-154 and europium-155 — most of which were created during reactor operations when neutrons from the reactor struck the metal and concrete of the reactor internal components, control rod blades, reactor vessel, thermal shield, and biological shield. Smaller amounts of radionuclides and non-radioactive hazardous materials are in the confinement building and ancillary structures, as well as in the soil under the buildings.

Several actions have been taken since 1999 to prepare the HFBR for permanent decontamination and dismantling, including shipping spent fuel elements and water from the spent fuel pool to an off-site facility for disposal, modifying the confinement structure and the spent fuel canal to meet Suffolk County Article 12 requirements that control and prevent pollution of the county’s water resources, and disposing or reusing shielding, chemicals and scientific equipment from the site. In 2006, ancillary buildings in the HFBR complex were dismantled and removed. Over the past few months, the reactor’s beam plugs and control rod blades were also removed and are being transported off site. As a result, the radiological inventory of the HFBR has been reduced by 35 percent, to approximately 42,000 curies. These completed activities are part of the work specified by the ROD.

Along with these prior steps, the remedy also specifies additional near-term actions, which include dismantling the remaining ancillary buildings, removing contaminated underground utilities and piping, and preparing the confinement building for safe storage. The ROD requires that these near-term actions be completed no later than 2020. Completion for a number of these near-term actions has been accelerated to 2011 as a result of funding made available under the American Recovery and Reinvestment Act.

The ROD also lays out a plan for the long-term segmentation, removal, and disposal of the remaining HFBR structures, systems, and components (including the reactor vessel and thermal and biological shields). These long-term actions will be conducted following a 65-year “safe storage” period to allow for the natural reduction of high radiation levels to a point where conventional demolition techniques can be used to dismantle these reactor components.

Environmental remediation at Brookhaven Lab is carried out under requirements of the federal Comprehensive Environmental Response, Compensation, and Liability Act (CERCLA) of 1980. CERCLA requires that the selected cleanup remedy must protect human health and the environment. The cleanup remedy also must be cost-effective, comply with other laws, and, to the greatest extent practical, use permanent solutions, alternative treatment technologies, and resource-recovery options.

The community involvement process is an integral part of making cleanup decisions under CERCLA. A public comment period for The Proposed Remedial Action Plan for the High Flux Beam Reactor was open from January 10 through March 17, 2008. Two information sessions were held on March 4, 2008, and a public meeting was held on March 6, 2008. Comments received during the public comment period and DOE responses are included in the ROD.