La Catrina String Quartet to Perform at Brookhaven Lab May 5

UPTON, NY — La Catrina String Quartet will perform at the U.S. Department of Energy's Brookhaven National Laboratory on Wednesday, May 5, at noon in Berkner Hall. Sponsored by Brookhaven Science Associates, the company that manages the Lab, the concert is free and open to the public. All visitors to the Laboratory age 16 and over must bring a photo I.D. 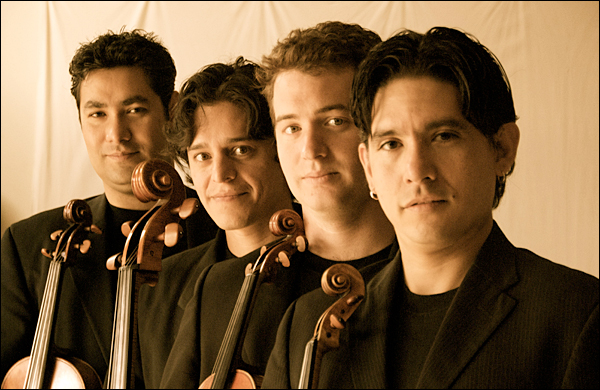 Hailed by Yo Yo Ma as wonderful ambassadors for music, the La Catrina Quartet is one of the most sought after ensembles on tour today. The Quartet has a mission to perform masterworks of the string quartet repertoire, while also promoting Mexican and Latin American art music. This unique musical blend yields programs which have proved enormously entertaining for audiences worldwide.

Currently Faculty Quartet-in-Residence at New Mexico State University, the La Catrina Quartet tours regularly throughout the US and Mexico, and has received important awards and recognitions. They have also premiered works by composers Thomas Janson and John Ferrito at the Kent Blossom Music Festival, and Zae Munn at the Chicago College of Performing Arts.

The Quartet participated in the highly competitive Association of Performing Arts Presenters 2007 Young Performers Career Advancement program in New York City, which concluded with a showcase performance of the next generation's classical music star performers in Carnegie Hall. For two years, they were the Quartet-in-Residence of the Western Piedmont Symphony in North Carolina. The La Catrina Quartet was also in residence at the Chamber Music Festival of San Miguel de Allende, Mexico, where they collaborated with the Brentano Quartet, the Poulenc Trio and The Miami Quartet.

This season they will be featured in concert series throughout the US and Mexico and will conduct several quartet residencies during the summer. They come to Brookhaven Lab on the day following their debut performance at Merkin Hall in New York City.