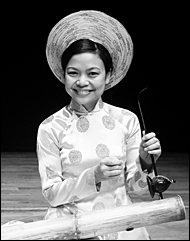 UPTON, NY — Nguyen Thanh Thuy, playing the Dan Tranh, and Ngo Tra My, playing the Dan Bau, are two prize-winning musicians from Vietnam who will give a recital at the U.S. Department of Energy’s Brookhaven National Laboratory on Wednesday, April 28, at noon in Berkner Hall. Sponsored by the Lab’s Asian Pacific American Association and Diversity Office, the concert is free and open to the public. All visitors to the Laboratory age 16 and over must bring a photo I.D.

The Dan Tranh is one of the most popular and romantic musical instruments in Vietnam. With from 17 to 22 strings, it is the smallest yet versatile member of a family of board-zither-like instruments in the Far East. The Dan bau is a Vietnamese monochord, a traditional one-string musical instrument. Played solo, it is central to Vietnamese folk music, a genre still popular today in the country.

Nguyen Thanh Thuy and Ngo Tra My, in addition to having successfully raised awareness of these Vietnamese instruments through their acclaimed performances at home and abroad — from Australia, China, Japan, and Russia, to Denmark, France, and the U.S. — both teach classes in Vietnamese musical instruments at the Vietnam National Academy of Music. 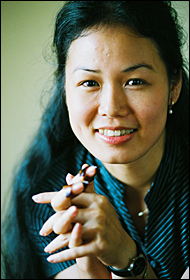 Nguyen Thanh Thuy is active in traditional and experimental fields of music and currently performs with musicians in Scandinavia in the summer. Ngo Tra My serves as a visiting teacher of Vietnamese instruments for several months a year in the in Malmo Academy of Music in Sweden. Both musicians have recorded many successful CDs, as soloists and in orchestra.