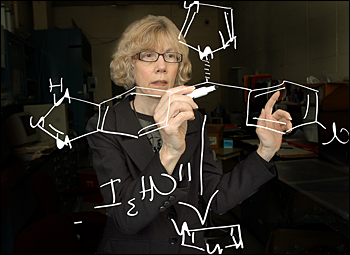 Over the past 35 years, researchers at the U.S. Department of Energy’s Brookhaven National Laboratory have developed and refined an imaging protocol that allows them to visualize the activity of the brain’s reward circuitry in both normal individuals and those addicted to drugs. The technique has led to better insight into why people take recreational drugs as well as ways to evaluate which strategies are most effective in treating addiction.

Joanna Fowler, a senior scientist in Brookhaven’s medical department and recent recipient of the National Medal of Science, will present highlights from this research program at the annual meeting of the American Society for Biochemistry and Molecular Biology in Anaheim, California, on April 26, 2010.

Drug addiction is a complex process that involves numerous biological and environmental factors, but a central element is how the drugs affect the activity of dopamine, the chemical “messenger” that regulates pleasure and reward in the brain.

To get a real-time sense of dopamine activity, Fowler and her colleague Gene-Jack Wang at Brookhaven, along with Nora Volkow, Director of the National Institute on Drug Abuse, and a team of collaborators combined positron emission tomography (PET), a medical imaging technology useful for identifying brain diseases, with special radioactive tracers that bind to dopamine receptors. The PET scan highlights the movement of the tracers in the brain, and can be used to reconstruct real-time 3-D images of the dopamine system in action.

Over the years, the scientists have tested this procedure on many drug-addicted volunteers as well as age-matched healthy control subjects and found that people with addictions in general have 15-20 percent fewer dopamine receptors than normal. These drug-addicted individuals thus cannot receive the dopamine pleasure signal released in response to the drugs — or sometimes even natural reinforcers like food.

“These addicted individuals all had a blunted dopamine response,” noted Fowler. “This reinforces the idea that drug addicts experience diminished feelings of pleasure, which drives their continual drug use."

Fowler added that the research program has studied multiple recreational drugs and found similar results. “So while various drugs operate by unique mechanisms, they all share a commonality in that the dopamine receptors in the brains of addicted individuals show an under-stimulated reward system.”

In an interesting correlation, Fowler noted that Gene-Jack Wang has also used the dopamine PET scans on obese individuals and found highly similar patterns of low dopamine receptors — validating the idea that, at least in some cases, obesity can also be considered a disease of addiction.

A potential valuable application of observing dopamine activity in real-time, Fowler noted, involves not looking at addicted individuals while they use drugs, but rather when they don’t.

“We can examine individuals as they use different coping strategies to try to suppress their desires for drugs or food,” she said, “and see in the scans which approaches work best.”

“We still have a lot of research to do before we fully understand why people take drugs,” Fowler continued, “but with the help of PET scans to help us understand the brain, we might help more people stop.”