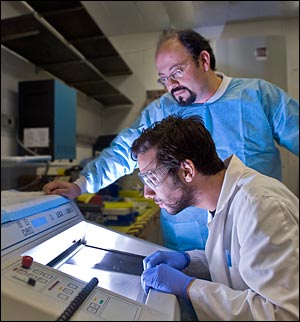 UPTON, NY — Researchers at the U.S. Department of Energy’s Brookhaven National Laboratory have shown that daily physical exercise during adolescence decreases cocaine-seeking behavior in young adult rats. These results indicate that physical activity during adolescence may protect against cocaine abuse later in life. The researchers also found a gender disparity: In both exercising and sedentary animals, females exhibited more cocaine preference than males. The results are available online through the journal Behavioral Brain Research.

“This is a first step in trying to understand the connection between exercise and substance abuse,” said lead author Panayotis (Peter) Thanos, a neuroscientist with Brookhaven Lab and the National Institute on Alcohol Abuse and Alcoholism (NIAAA) Laboratory of Neuroimaging. “We want to see how manipulating exercise will impact susceptibility to drug abuse and addiction.”

Previous studies had suggested that among animals allowed to self-administer addictive drugs, regular exercise decreased drug use. In addition, physical exertion improves the way the brain processes dopamine, a chemical linked to experiencing pleasure and reward. Expanding on these studies, Thanos’ team decided to study how exercise during adolescence affected later drug use.

“Adolescence is an important developmental stage where exercise plays a key role both in brain development and brain chemistry,” explained Thanos. “Adolescent and young adult animals are also more susceptible to drug abuse.”

While the control animals lived a sedentary existence, the exercise group began working out as adolescents. For 5 days a week over the course of 6 weeks, they ran on treadmills. This regimen continued during the conditioning and testing periods, when animals were trained to expect cocaine in a given environment and then tested to see if they preferred the cocaine-paired environment.

The scientists were checking for a “conditioned place preference,” or CPP, a well-known technique for measuring an animal’s desire for a drug and propensity for addiction.

Before animals were exposed to any drugs, they were placed in a three-chamber apparatus, consisting of two visually distinct compartments (one black and one white, with different floors in each) connected by a corridor, and observed to see which compartment they preferred.

The next step was conditioning. Every other day, both sedentary and exercise animals received an injection of cocaine, with a saline injection on the off days. After receiving the saline, they were confined to the room they had initially preferred, whereas a shot of cocaine was paired with a stay in the originally less-favored chamber. The cocaine was a “physiological dose,” enough to stimulate a behavioral effect.

After eight days of conditioning, animals were tested and again allowed to wander freely between the two compartments of the apparatus. Animals that spent significantly more time in the compartment associated with cocaine use had established a cocaine conditioned place preference.

In male rats that had been exercising regularly since adolescence, no significant CPP developed, which indicates that they had been protected from forming a strong attachment to cocaine. Although female exercise rats still manifested some CPP, it was significantly less than that of the non-exercising female control group.

In both groups, the females developed a stronger affinity for cocaine than the males. This phenomenon is in agreement with other studies showing that women are more susceptible to drug addiction than men, at all stages of the addiction process. However, the fact that female rats also run more than males when given access to a running wheel led Thanos to suggest that a more strenuous amount of exercise could further reduce or even eliminate CPP in females.

“The major idea in this paper is that animals exposed to exercise during adolescence showed less preference for cocaine later in life,” said Thanos. “This hammers home the notion that exercise may play a valuable role in decreasing the risk of drug addiction.”

Funding for this research was provided by NIAAA.

All research involving laboratory animals at Brookhaven National Laboratory is conducted under the jurisdiction of the Lab’s Institutional Animal Care and Use Committee (IACUC) in compliance with the Public Heath Service (PHS) Policy on Humane Care and Use of Laboratory Animals, the U.S. Department of Agriculture's Animal Welfare Act, and the National Academy of Sciences’ Guide for the Care and Use of Laboratory Animals. This research has enhanced understanding of a wide array of human medical conditions including cancer, drug addiction, Alzheimer's and Parkinson's diseases, and normal aging and has led to the development of several promising treatment strategies.