UPTON, NY — Robert Palmer, a senior physicist and head of the Advanced Accelerator Group at the U.S. Department of Energy’s Brookhaven National Laboratory, was awarded the Advanced Accelerator Concepts Prize (AAC) at the 2010 AAC Workshop held in Annapolis, Maryland, in June. The prize, which consists of $6,000, a plaque, and a certificate, was made possible by a donation from Bergoz Instrumentation of Saint Genis Pouilly, France, manufacturers of electronic instruments for high-energy particle accelerators. 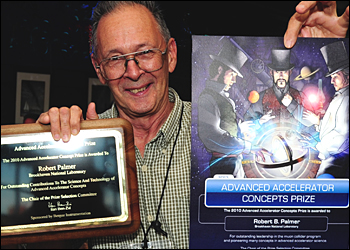 Palmer was awarded for “outstanding leadership in the muon collider program and pioneering many concepts in advanced accelerator science.”

“I am honored to receive this award,” Palmer said. “My career spans 50 years, and, since the 1970s, my focus has been in accelerator physics. Since the late 1980s, I’ve had an interest in muon colliders, and lately my colleagues and I are beginning to see results. A national Muon Collider Program is being established, increased funding is expected, and a feasible design seems to be emerging. It is an exciting time.”

Palmer is an executive board member of the Muon Collider Collaboration, which has over 100 members from 27 institutions. Currently, the collaboration is studying the feasibility of building a high-energy muon collider that would enable physicists to make detailed studies of new particles that may be found at the Large Hadron Collider (LHC) at CERN, the European Organization for Nuclear Research. The hope is that a muon collider could reach higher energies at lower cost than linear electron colliders. Many physics challenges have to be met before a muon collider is built, so it probably would not be constructed until 2028.

Palmer has a distinguished history of contributions to accelerator physics. In 1972, he invented the inverse free electron laser, an instrument that gains energy from light and accelerates particles using a laser. In 1973, he proposed a method called momentum stochastic cooling, also known as the Palmer method, which corrects the momentum spread of particles as they circulate around an accelerator.

From 1980 to 1983, Palmer and his associates developed magnets for Brookhaven’s Colliding Beam Accelerator Project, also known as ISABELLE, and in 1990 he started work on magnet development at the Superconducting Super Collider (SSC). Both of these projects were subsequently cancelled, but many of today’s superconducting accelerator magnets can be traced back to Palmer’s ideas. For example, he introduced the 2-in-1 magnet, in which two magnets are inserted into one block of iron, rather than two, which represents savings in cost and space, as well as better beam efficiency. The LHC contains 2-in-1 magnets because of their space-saving capacity.

After earning a Ph.D. in physics at Imperial College, London, in 1960, Palmer joined Brookhaven Lab as a research associate. He rose through the ranks to become a senior physicist in 1974, and Associate Laboratory Director for High Energy Physics in 1983.

From 1987 to 1990, and from 1991 to 1996, Palmer held joint appointments at Brookhaven and the Stanford Linear Accelerator Center. In 1990, he worked at the SSC, and returned to Brookhaven in 1991 as head of the Laboratory’s Center for Accelerator Physics (CAP). Currently, he is in charge of the Advanced Accelerator Group at CAP.

In addition to his notable achievements in accelerator physics, Palmer has made significant discoveries in particle physics. In 1993, he shared the American Physical Society’s W.K.H. Panofsky Prize with Brookhaven Lab’s Nicholas Samios and Ralph Shutt for the 1962 discovery of the Omega-minus particle. Palmer also played a role in the discovery of neutral currents in the early 1970s at CERN, the charmed baryon at Brookhaven in 1975, and direct single photons at CERN in 1978.

In 1997, Palmer received Brookhaven Lab’s Research & Development Award for his contributions to accelerator and detector concepts and technology. He also was honored with the American Physical Society’s Robert R. Wilson Prize in 1999 for his outstanding achievement in the physics of particle accelerators. In 2008, he was elected as a member of the National Academy of Sciences.