The following press release is being distributed by the InterAction Collaboration, whose members represent the world's particle physics laboratories in Europe, North America and Asia, including the U.S. Department of Energy’s Brookhaven National Laboratory. Brookhaven is one of 13 institutions that is administering and supporting the first African School of Physics at the National Institute of Theoretical Physics in Stellenbosch, South Africa. Brookhaven physicist Ketevi Assamagan, who was born in the West African nation of Togo and works on the ATLAS experiment at CERN’s Large Hadron Collider, is on the school’s international organizing committee and also is a lecturer. For more information about Brookhaven’s involvement, contact Kendra Snyder at ksnyder@bnl.gov or 631-344-8191. 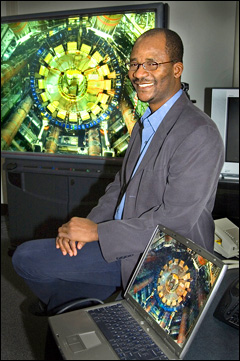 Brookhaven physicist Ketevi Assamagan, who was born in the West African nation of Togo and works on the ATLAS experiment at the LHC, is a lecturer and member of the school’s international organizing committee.

This August, students and scientists from African countries will get the rare opportunity to learn about innovative physics experiments, accelerators and technology on their own continent.

The first African School of Physics will take place August 1-21 at the National Institute of Theoretical Physics in Stellenbosch, South Africa. Fifty-nine students — including 40 from 17 African countries — will take part in the program, learning about theoretical and experimental physics from leading international scientists. Most of the students are pursuing or have completed advanced degrees in physics, but lack opportunities to gain specialized knowledge in subatomic physics. The trip and expenses for all African students are paid for by the school, which is supported by 13 international institutions.

"This may be the first opportunity these students have to learn about particle and nuclear physics," said Steve Muanza, a physicist at France’s CNRS/IN2P3 and the co-founder and director of the school. "We hope that the material presented at the school piques their interest and they go on to pursue these topics."

Topics to be covered include current and future particle and nuclear physics experiments, theoretical physics, particle accelerators and technology, information technology and grid computing. Simon Connell, a member of the local organizing committee, believes that the intensive three-week program could equate to a semester-long university course.

"We will cover a lot of subject matter not taught at any university in Africa," Connell said. "Students can take the knowledge they learn here back to their home institutions, where they can continue researching and teaching. We don't expect the benefits of the school to stop when they leave."

Students won’t be limited to lecture halls. A videoconference with the CERN particle physics laboratory in Geneva, Switzerland, will link students with physicists operating the Large Hadron Collider from CERN’s Control Centre for accelerators. Students will also spend one afternoon at iThemba LABS, an accelerator facility in South Africa, practicing laboratory experiments and learning about how particle physics and its associated technologies can apply to other fields, including medicine.

“The lessons in these final days of the school will help students link the concepts they've learned to the real world," said Fermilab scientist Christine Darve, head school organizer.

Another participant, Eno Ituen, a senior lecturer and former physics department head at the University of Uyo in Akwa Ibom, a state in Nigeria, anticipates connecting with experts in the field.

This year’s school takes place in South Africa, the first African country to become a member of an experiment at CERN’s Large Hadron Collider. Organizers hope this will be the start of a tradition, and plan to host the school every two years.