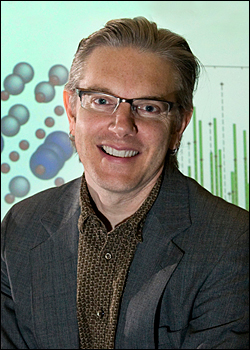 UPTON, NY — Simon Billinge, a senior scientist at the U.S. Department of Energy’s Brookhaven National Laboratory, has been named a recipient of the Centre for Diffraction Data’s 2010 J. D. Hanawalt Award, along with his collaborator and former advisor, Takeshi Egami of the University of Tennessee, Knoxville. The award is given every three years for an important contribution to the field of x-ray powder diffraction, a scientific technique that uses x-rays to probe the structure of materials made of tiny crystals forming a powder.

Named after the late J.D. Hanawalt, a pioneering crystallographer who developed a powder diffraction database in the 1930s that is still in use today, the award consists of a citation and a gift of $1,000. Billinge received the award at the Centre for Powder Diffraction’s 59th annual Denver X-ray Conference on August 4.

“I am pleased to be chosen for this award, along with Takeshi Egami,” Billinge said. “Together we have made developments to a technique called the atomic pair distribution function method, allowing it to be used to study the structure of complex materials on the nanoscale, with a range of a few hundred to a few thousand atoms.”

Using this method, scientists mathematically calculate the probability of two atoms being separated by a certain distance, and then compare that to distances in real materials using short-wavelength x-rays at a synchrotron. This can yield precise atomic coordinates revealing the nanoscale structure of the material. Knowing exactly where each atom in a nanomaterial is located in this way helps scientists to precisely tailor the material’s properties for its intended use.

Such detailed measurements are applied to the study of the properties of diverse materials of interest, for example, in energy, catalysis, environmental remediation, and pharmaceuticals research. At Brookhaven, the focus is on the role of nanoscale fluctuations in strongly correlated electron materials, which include a wide range of materials that have unusual electronic and magnetic properties that are often useful. This class of materials includes superconductors, materials that carry current with no resistance at very low temperatures, so that no energy is lost in transmission. Scientists’ key challenge is to develop superconductors at temperatures that make them practical in real world situations.

A Fellow of the American Physical Society and a former Alfred P. Sloan Research Fellow, Billinge has won numerous awards for his work, including the Electro-science Laboratories Award and Sigma Xi Outstanding Thesis Award, both in 1992; the Thomas H. Osgood Undergraduate Teaching Award in 1998; Michigan State University College of Natural Science’s Distinguished Faculty Award in 2006; and the university’s Distinguished Faculty Award in 2007.