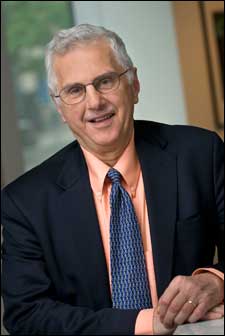 UPTON, NY — Bruce Alberts, a prominent biochemist who is the Editor-in-Chief of the international weekly journal Science, will give two George B. Pegram Lectures at the U.S. Department of Energy’s Brookhaven National Laboratory. On September 14, at 4 p.m., Alberts will speak about “Science Education: From Kindergarten Through College,” and on September 15, at 11 a.m., he will present “Biology Past and Biology Future: Where Have We Been and Where Are We Going?”

Inaugurated in 1959, the Pegram lectures bring distinguished scholars to the Laboratory to speak on topics of both scientific and general interest. Sponsored by Brookhaven Science Associates, the lectures are free and open to the public. Visitors to the Laboratory age 16 and over must bring a photo ID.

In the September 14 lecture on science education, Alberts will draw on his two decades of experience in working with elementary and secondary teachers in San Francisco, where he launched a program that pairs college students and faculty with teachers from more than 80 percent of the city’s schools. He has also worked to develop the first national science curriculum standards for K-12 education. Currently, he serves as one of three U.S. Science Envoys to the Muslim world for President Obama; his mission includes providing help with science education at all levels through partnerships with U.S. institutions.

In the September 15 talk, Alberts will discuss the dramatic ways in which scientists’ views of the chemistry of life have changed over the last 40 years. Looking toward the future, he will suggest that maintaining rewards for risk-taking in research will be critical for generating new breakthroughs needed for understanding the cell and for biomedicine.

Alberts, who is a co-author of a preeminent textbook, The Molecular Biology of the Cell, originally published in 1980, will discuss his work on the fifth edition, which contains a few surprises. In particular, he will explain how cells are more complicated than originally thought. For example, recent research indicates that cells have positive and negative feedback loops that underlie all of cell chemistry, a highly organized system similar to wiring diagrams for computers. These complex feedback mechanisms regulate nervous and hormonal responses.

Alberts will also explain how extensive scaffold networks produce biochemical sub-compartments without requiring a membrane. Each of these conglomerates of molecules has a specific function and is localized within one particular area of the cell.

Bruce Alberts earned a Ph.D. in biophysics from Harvard University in 1965, and did postdoctoral research at the Institute de Biologie Moleculaire, Geneva, Switzerland, before he started his career on the faculty of Princeton University in 1966. He joined the University of California (UC), San Francisco, in 1976 as Professor and Vice Chairman, Department of Biochemistry, and, in 1990, he became the American Cancer Society Lifetime Research Professor, Department of Biochemistry and Biophysics. In 1993, he left UC San Francisco to become President of the National Academy of Sciences in Washington, D.C., holding that position until 2005. He then returned to UC San Francisco, where he is currently Professor Emeritus. In 2007 and 2008, he was President of the American Society for Cell Biology, and, in 2008, he became Editor-in-Chief of Science. He has been a U.S. Science Envoy since 2009.

Since 2000, Alberts has served as the co-chair of the InterAcademy Council, an organization in Amsterdam governed by the presidents of 15 national academies of sciences, which was established to provide scientific advice to the world. Alberts has earned numerous honors and awards for his work, including 16 honorary degrees. He currently serves on the advisory boards of more than 25 non-profit institutions, including Lawrence Berkeley National Laboratory.