The following news release about the Large Synoptic Survey Telescope (LSST) was issued today by the LSST Corporation, the non-profit organization formed in 2003 to design, construct, and operate the LSST, a huge telescope designed to image the entire visible southern sky. At the heart of the camera are 3 gigapixels of advanced sensors packaged into a set of 25 "towers" with tightly integrated electronics and cooling components. Brookhaven researchers are part of a large team responsible for designing and assembling these key building blocks. Once in operation, the LSST will provide a rich set of data to researchers at Brookhaven and other institutions to study dark matter and dark energy, two key ingredients of the universe about which very little is presently known. For more information about Brookhaven's role in the project, contact Karen McNulty Walsh at (631) 344-8350 or kmcnulty@bnl.gov. 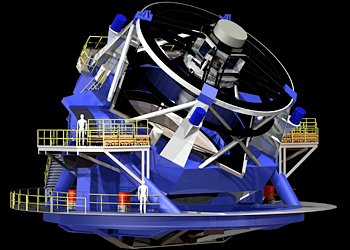 The LSST will peer at distant galaxies to probe the mysteries of dark matter and dark energy.

In a report released this morning, “New Worlds and New Horizons in Astronomy and Astrophysics,” a prestigious committee convened by the National Research Council for the National Academy of Sciences ranked the Large Synoptic Survey Telescope (LSST) as its top priority for the next large ground‐based astronomical facility. The so‐called “Astro2010” report states “The committee recommends that LSST be submitted immediately for NSF’s Major Research Equipment and Facilities Construction (MREFC) consideration with a view to achieving first light before the end of the decade. ...The top rank accorded to LSST is a result of (1) its compelling science case and capacity to address so many of the science goals of this survey and (2) its readiness for submission to the MREFC process as informed by its technical maturity, the survey’s assessment of risk, and appraised construction and operations costs. Having made considerable progress in terms of its readiness since the 2001 survey, the committee judged that LSST was the most ready‐to‐go.”

“We are absolutely delighted to hear this strong endorsement from our colleagues in the scientific community for a project that we have been advocating for many years”, said LSST Director and University of California, Davis, Professor J. Anthony Tyson. “LSST will transform the way we study the Universe. By mapping the visible sky deeply and rapidly, the LSST will let everyone experience a novel view of our Universe and enable exploration of exciting new questions in a variety of areas of astronomy and fundamental physics.”

Scheduled to begin full survey operations 6 years after the start of construction, the 8.4‐meter LSST telescope will be equipped with the world’s largest digital camera (3.2 billion pixels). This system will survey the entire visible sky to very faint limits in multiple colors every week. The survey will last for 10 years and will produce 2000 images of every part of the sky over 20,000 square degrees. It will be constructed on Cerro Pachón, a mountain in northern Chile. LSST will produce 30 Terabytes of data per night, yielding a total database of 100 Petabytes. This massive data set will be used to construct for the first time a color “movie” of the sky that will enable unique and powerful studies of objects that move or change in brightness. Examples range from potentially hazardous near‐Earth asteroids to exploding massive stars in the distant Universe. The total ten‐year data set can also be used to probe the mysteries of Dark Matter and Dark Energy, two of the most pressing challenges to our current understanding of the fundamental forces and basic building blocks of Nature.

A unique feature of the project is that the database and resulting catalogs will be made available to the US and Chilean communities at large with no proprietary restrictions. A sophisticated data management system will provide easy access, enabling simple queries and exploration of the images by individual users, including professionals, amateurs, educators, and the public. The public will actively share the adventure of discovery of our dynamic Universe as described by Google CEO Eric Schmidt: “LSST will produce a New Sky. Unique probes of our universe will result from this innovation, enabling discovery of unimagined phenomena. LSST will collect and organize the information in an expansive new view of our Universe, making it available to curious minds of all ages.”

Thirty four universities and national labs have joined together in a public‐private partnership to build LSST. The National Science Foundation and the Department of Energy Office of Science have contributed funds for design and development of the LSST.

Significant private support has come from Charles Simonyi, who said he was motivated by the broad impact of the project. “The broad science and educational opportunities enabled by LSST have been reaffirmed by this top ranking by the National Academy of Sciences. With LSST we’ll be able to gather thousands of times more data than possible until now, producing a 'movie' of our Universe and a database suitable for answering a wide range of pressing questions: What is dark energy? How did the Milky Way form? Are there potentially hazardous asteroids that may impact the Earth? And what sort of new phenomena have yet to be discovered? Let's get on with construction."

Another major donor, Bill Gates, said “LSST is just as imaginative in its technology and approach as it is with its science mission. The 8.4 meter LSST telescope and the three gigapixel camera are thus a shared resource for all humanity - the ultimate network peripheral device to explore the Universe.”