Suite of Recovery Act-funded tools designed, assembled by Brookhaven and collaborators will help clarify role of aerosols in climate change 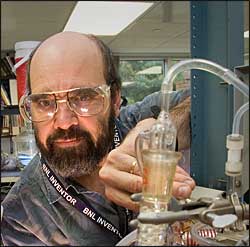 UPTON, NY — The first of four mobile shipping containers outfitted with a suite of sophisticated atmosphere-monitoring instruments departed from the U.S. Department of Energy’s Brookhaven National Laboratory on September 17, 2010, for deployment high on a mountain in Colorado. The instruments on this and three other mobile, self-contained research stations being assembled at Brookhaven were purchased and/or custom designed by Brookhaven scientists and collaborators with funding from the American Recovery and Reinvestment Act for DOE’s Atmospheric Radiation Measurement (ARM) Climate Research Facility.

“These instruments will function as a powerful tool for adding to our scientific understanding of how aerosols impact climate change,” said Brookhaven atmospheric chemist Stephen Springston, who leads the Brookhaven team.

“Aerosols directly affect climate through the absorbance and reflection of light, but the bigger and much less understood impact of aerosols is their influence on clouds,” Springston said. “Even a small change in cloud cover or persistence, when accumulated over the entire planet, causes a significant alteration of Earth’s heat budget. These new laboratories will directly measure properties of aerosols such as concentration, size distributions, light scattering, light absorption and propensity for cloud formation.” 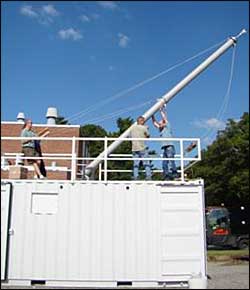 Attaching the sampling tower to the AOS for testing at Brookhaven.

Because these units will be deployed under possibly severe conditions, they incorporate a multitude of safety and stability features, as well as capabilities to remotely operate and monitor the instruments. For example, delicate sensing and monitoring equipment and data acquisition systems are installed in shock-mounted instrument racks. Pieces to be installed on location, such as railings, sampling towers, and pumps, are all secured to cradles and hard points on the floor, walls and ceiling during shipping. 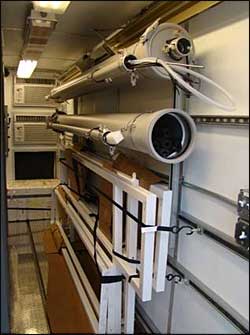 Railings and sampling towers are secured for shipping and detached for easy installation on location.

“Setup takes less than half a day,” Springston said. “And in the case of severe weather, the unit can go into ‘turtle mode,’ with sampling towers lowered, instruments idled, and outside doors sealed in one to two hours or less.”

Even when in sampling mode, with the 20-foot tower attached, the unit is weather-ready. “In testing at Brookhaven, the inlets and all penetrations have proved leak free during several torrential rain storms,” Springston said.

In the event of power failure, total computer power consumption is so low, all units can be held on a single uninterruptible power supply system long enough for automatic, gentle shutdown of the instruments and a controlled shut down of the computer systems. If anything does go wrong, all of the computers are physically identical, allowing for easy replacement.

A close twin of the AMFII AOS will be permanently deployed to the ARM site on the north coast of Australia later this year. Instead of the cold faced on a Colorado mountain, the Tropical West Pacific (TWP) AOS will have to withstand high temperatures, sweltering humidity, and the occasional typhoon. The third and fourth units will be deployed together as the Mobile Aerosol Observing System (MAOS). Half of MAOS will be a conventional AOS, but the other half will add state-of-the art instruments for measuring the chemical composition of aerosols. 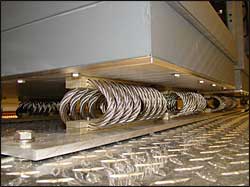 All instruments are mounted in shock-stabilized racks.

“Because of the budget, we had not planned on having such a wide range of aerosol measurements,” Springston noted. “The Recovery Act gave us an opportunity to include additional tools for a more complete sampling system.”

AOS is funded primarily by the DOE Office of Science.