UPTON, NY — A study at the U.S. Department of Energy’s (DOE) Brookhaven National Laboratory has demonstrated that a molecule “tagged” with a radioactive form of carbon can be used to image aromatase, an enzyme responsible for the production of estrogen, in the human brain. The research, published in the November issue of Synapse, also uncovered that the regions of the brain where aromatase is concentrated may be unique to humans. 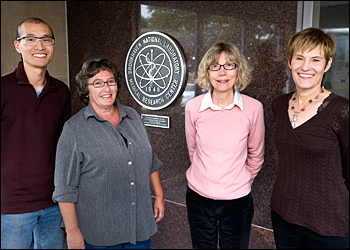 “The original purpose of the study was to expand our use of this radiotracer, N-methyl-11C vorozole,” said Anat Biegon, a Brookhaven neurobiologist. “Proving that a radiotracer like vorozole can be used for brain-imaging studies in humans would be a gateway to new research on estrogen in the brain. You cannot look at these brain pathways in living humans in any other way.”

Vorozole binds to aromatase, an essential catalyst in the biosynthesis of estrogen. Since estrogen is implicated in a range of conditions and pathologies, from breast cancer to Alzheimer’s disease, studying its production in the human body using noninvasive imaging techniques like positron emission tomography (PET) can be a useful diagnostic and investigative tool. This is the first study to demonstrate that vorozole is a useful radiotracer for studying estrogen-producing hotspots in the human brain.

In these PET scans, taken from the front to the back of the head, color indicates the level of vorozole, a molecule that binds to the enzyme responsible for estrogen production in the brain (following the rainbow spectrum, red is the highest level, blue the lowest). These illustrate the regions found to have the highest levels of estrogen production (from left the thalamus, amygdala, and medulla oblongata’s inferior olive), a pattern that was consistent across all six subjects and may be unique to humans.

The team used PET to scan the brains of six young, healthy nonsmoking subjects — three men and three women. Researchers scanned the female subjects at either the midcycle or early follicular phase of the menstrual cycle, to incorporate variation in plasma estrogen levels. Prior to the scans, all subjects received an injection containing a radiolabeled form of vorozole, synthesized and purified by radiochemists at Brookhaven. The men underwent a second scan after being administered an aromatase inhibitor.

As expected, subjects who received the inhibitor showed low concentrations of radioactive vorozole, indicating lower availability of aromatase, compared to those not exposed to the inhibitor.

The scientists found a surprise, however, in the "geographical" (anatomical) distribution of aromatase in the brain. The highest levels of aromatase appeared in the thalamus and then the medulla, in a pattern that was consistent across all six subjects. This differs from what researchers have observed previously in animal studies, where aromatase is concentrated in smaller regions, principally the amygdala and preoptic areas.

“This started as a simple tool development study and now it’s turned out to be much more interesting than that,” Biegon said. “The question that’s raised is what is aromatase doing in these particular brain regions?”

To answer this, Biegon and her colleagues have already begun studying a larger group of 30 subjects. They will examine differences in brain aromatase related to a range of factors including age, sex, personality, and memory. Beginning with healthy subjects and advancing to patients with specific conditions and diseases, they intend to study the role of estrogen in the brain with respect to disorders and diseases such as unusual aggression, breast cancer, and Alzheimer’s disease.