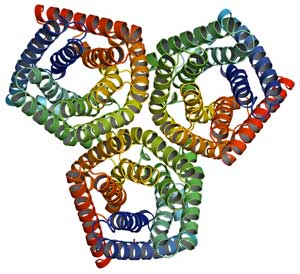 UPTON, NY — Using intense beams of x-rays at the U.S. Department of Energy’s (DOE) Brookhaven National Laboratory, researchers have uncovered the atomic structure of a protein responsible for closing the “mouths,” or stomata, of plants. These molecular photographs could help scientists understand how plants will respond to environmental changes facing our planet, such as drought and escalating levels of carbon dioxide and ozone. The study, led by researchers at Columbia University and the New York Structural Biology Center, is published in the October 28, 2010, issue of the journal Nature.

Plants “eat” and “breathe” through their stomata — tiny pores that pattern their leaves. When the sun is out, these small holes pull in carbon dioxide for energy generation through photosynthesis, and expel oxygen and water vapor. At night, to conserve moisture, the stomata are closed by a pair of kidney-shaped guard cells — the closest structure a plant has to muscle.

But darkness isn’t the only signal that calls for guard cells to take action. Stomata also will seal up in response to high carbon dioxide levels, ozone, low humidity, and drought. In this study, researchers searched for details about the protein that starts the molecular chain reaction leading to stomata closure. 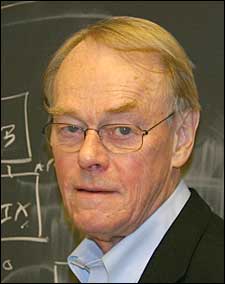 “Our work falls in the middle of an important discussion about how plants respond to environmental factors caused by global warming,” said Columbia University scientist Wayne Hendrickson, who also is the Chief Life Scientist in Brookhaven’s Photon Sciences Directorate. “Once we know this molecule intimately, we have a better chance of engineering solutions to help plants cope with pressures from environmental problems.”

The protein in question is an anion channel, which moves negatively charged atoms (in this case, chloride) across the cell membrane to reduce the plant’s water pressure. Low pressure causes the guard cells to go limp, and subsequently, the stomata to close.

Coincidentally, around the same time that this protein was discovered in plants, the Columbia-led team solved the structure of one of its close bacterial family members at Brookhaven’s National Synchrotron Light Source (NSLS).

At NSLS, researchers bombarded the bacterial protein with bright beams of x-rays and observed, via detectors and computers, how the light was diffracted from the atoms. They then analyzed these diffraction patterns to yield a 3-D snapshot of the protein’s structure. 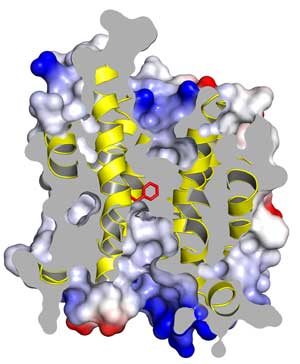 The homology model of the plant protein studied, focusing on one section of the trimer. This cutaway view shows the anion channel blocked by a phenylalanine ring (in red). When phosphate is attached to this channel, its structure shifts and opens, allowing anions to flow through it.

Although membrane proteins are notoriously difficult to characterize, the scientists ended up with a “spectacular” result, Hendrickson said. But the researchers were even more excited to learn about their protein’s plant relative, which, up to that point, had an elusive structure.

“As soon as we learned about this link, we set out to follow up on the previous work done in the field and make a hypothesis about how the thing actually works,” Hendrickson said.

Using the bacterial protein as a model for the plant version, and doing experiments on the plant protein itself, the scientists discovered the anion channel’s “on” switch. This channel is typically in a very strained conformation that prevents anions from passing through it. But when phosphate attaches to the channel, its structure shifts and opens, allowing anions to freely flow. As a result, the water pressure drops and the stomata close.

“If we didn’t have such high-resolution data, we wouldn’t be able to tell if this was a mistake or part of the real structure. We wouldn’t have been able to do this without the synchrotron,” said Hendrickson. He added that this type of research will be even further advanced at Brookhaven’s National Synchrotron Light Source II (NSLS-II), a facility currently under construction that will produce x-ray beams 10,000 times brighter and with much higher resolution than those at NSLS.