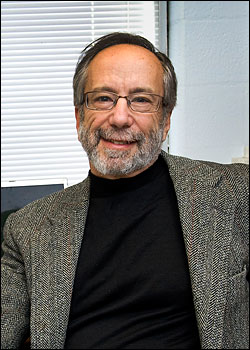 UPTON, NY — Recognized for a “needle-in-a-haystack” discovery, Laurence Littenberg, a senior physicist and associate chair for high-energy physics in the Physics Department of the U.S. Department of Energy’s Brookhaven National Laboratory, has been chosen to receive the American Physical Society’s (APS) 2011 W.K.H. Panofsky Prize in Experimental Particle Physics. He will share the prize with Douglas Bryman of the University of British Columbia and A.J. Stewart Smith from Princeton University. The physicists will receive the prize, consisting of $10,000 (shared equally) and a certificate citing their contributions to physics, at the APS April 2011 meeting to be held in Anaheim, California.

The physicists were cited for discovering and measuring a very rare decay of a positively charged subatomic particle called a kaon, or K meson — a feat reported in 1997 by a team of 50 collaborators from around the world after ten years of searching through the remains of the decays of 1.5 trillion particles. At an experiment called E787 at Brookhaven’s proton accelerator, the Alternating Gradient Synchrotron (AGS), the scientists discovered the rare mode in which a K meson decays to a pi meson and a neutrino-antineutrino pair — a process with a probability of about one in ten billion.

Finding this rare kaon decay sheds new light on the universe’s most elemental forces and most basic building blocks, as explained by the theory of subatomic particles known as the Standard Model. “This research has been extremely influential in subsequent experimental and theoretical work in particle physics,” said Thomas Ludlam, chair of Brookhaven Lab’s Physics Department.

When subatomic particles decay, they usually break down into more stable, predictable particles. Most often, the K meson decays either to a muon and a neutrino or to two pi mesons, one positively charged and one neutral. Finding the very rare decay was possible because the AGS had state-of-the-art equipment capable of examining one million decays per second, but it was a difficult task for the physicists. Littenberg, who, with Bryman and Smith, was a co-spokesperson for the E787 experiment, explained, “I believe this decay was harder to find than the proverbial ‘needle in a haystack,’ not only because of its rarity, but also because the neutrino and antineutrino – two of the particles arising from the decay – can’t be detected. We could only detect the pi meson – one-third of what was happening during the decay.”

Littenberg earned a bachelor’s degree in physics from Cornell University in 1963, and both a master’s degree and Ph.D. in physics from the University of California, San Diego (UCSD), in 1965 and 1969, respectively. He was a research associate at UCSD before joining Daresbury Laboratory in Cheshire, England, in 1970 as a senior research associate. He came to Brookhaven Lab in 1974 as an associate physicist, and rose through the ranks to become a senior physicist in 1989, and associate chair for high energy physics in Brookhaven’s Physics Department in 2007. An APS fellow, Littenberg won the Brookhaven Science & Technology Award in 2000.