UPTON, NY — The American Association for the Advancement of Science (AAAS) has awarded three scientists from the U.S. Department of Energy’s Brookhaven National Laboratory the distinction of Fellow. Steven Dierker, Laurence Littenberg and Dmitri Kharzeev will be among 503 AAAS members to receive this honor for their distinguished efforts toward advancing science or its applications. The new Fellows will be presented with an official certificate and rosette pin on Saturday, February 19, at the 2011 AAAS Annual Meeting in Washington, D.C.

The AAAS Fellows from Brookhaven Lab are: 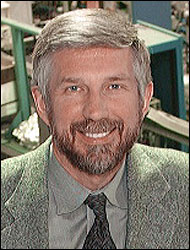 “For pioneering the development of novel techniques, forefront studies of superconductors, soft condensed matter, colloids, and polymers, and inspired leadership of the NSLS-II Project.”

Dierker is the Associate Laboratory Director for Brookhaven’s Photon Sciences Directorate, where he oversees the operation of the National Synchrotron Light Source (NSLS) as well as construction of its successor, the National Synchrotron Light Source II (NSLS-II). NSLS draws, each year, about 2,200 researchers from 400 universities, government labs, and companies to study a wide range of materials, from catalysts, to computer chips, to biological molecules. But to take their research to the next level — to probe even smaller, subtler details of their samples — scientists need more intense, better-focused light. NSLS-II will be the world’s most advanced synchrotron light source, producing x-rays 10,000 times brighter than NSLS.

“There’s a huge sense of excitement within the synchrotron community for the scientific advances that this unique machine will enable,” Dierker said. “I’m honored to be recognized by AAAS for my scientific accomplishments and for my leadership of the NSLS-II project. I’m proud to work alongside the dedicated and talented staff who keep NSLS thriving and who are helping Brookhaven greatly advance photon science research with the NSLS-II project.”

After earning B.S. degrees in both physics and electrical engineering in 1977 from Washington University, Dierker earned an M.S. and Ph.D. in physics from the University of Illinois, Urbana-Champaign, in 1978 and 1983, respectively. In 1983, he joined the Semiconductor and Chemical Physics Research Department at AT&T Bell Laboratories (now Lucent Technologies), where he studied problems in soft condensed matter using light scattering and neutron scattering. In 1990, he joined the University of Michigan, where he was professor of physics and applied physics. While there, he pioneered the development of a new synchrotron technique called x-ray photon correlation spectroscopy (XPCS). He joined Brookhaven in May 2001 as Chair of NSLS, becoming the Associate Laboratory Director for the newly created Light Sources Directorate (now known as the Photon Sciences Directorate) in 2003. He also continued to serve as NSLS Chair until 2005, when he stepped down to take on the role of NSLS-II Project Director. 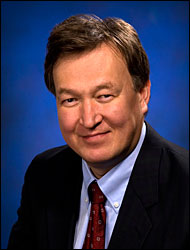 “For distinguished contributions to the field of theoretical nuclear physics, specifically the understanding of relativistic heavy ion physics.”

Working with data from heavy ion collisions at Brookhaven’s world-class accelerator, the Relativistic Heavy Ion Collider (RHIC), Kharzeev has focused his theoretical research on understanding the properties of quark-gluon plasma, the type of matter that is thought to have existed at the first millionth of a second after the Big Bang. Currently, he is connecting the physics of RHIC to cosmology in his investigation of the role of fundamental symmetries in the structure of the universe.

Specifically, Kharzeev is attempting to unravel the mystery of why symmetries are broken: Why is the observable universe made almost solely of matter, and not antimatter? Galaxies violate a physics principle called parity invariance when they spiral, so why does this happen? In heavy ion collisions at RHIC, similar asymmetries can be studied in the emission of positive and negative particles, providing data that may lead to unraveling these puzzles.

“RHIC has provided theoretical physicists like myself with rich wells of data for examining basic questions about the nature of matter,” Kharzeev said. “I am honored that my peers have recognized my work through this fellowship.”

Kharzeev earned a Ph.D. in physics from Moscow State University in 1990, and after working as a research associate at the Italian Institute of Nuclear Physics and at CERN, the European Organization for Nuclear Research, he joined Brookhaven Lab in 1997 as a Fellow of the RIKEN-BNL Research Center. He was appointed an associate scientist at Brookhaven in 1999 and rose through the ranks to become a senior physicist in 2006, the same year he became a Fellow of the American Physical Society. He led Brookhaven Lab’s Nuclear Theory Group from 2004 to 2010. Kharzeev also is a professor at Stony Brook University. 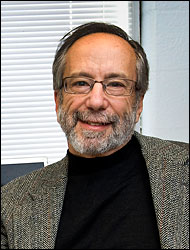 “For distinguished contributions to the field of rare K decays.”

Littenberg is being recognized for a “needle-in-a-haystack discovery in 1997 — finding and measuring a very rare decay of a positively charged subatomic particle called a kaon, or K meson. He worked with Douglas Bryman of the University of British Columbia, A.J. Stewart Smith from Princeton University and a team of 50 collaborators from around the world for a decade, searching through the decays of 1.5 trillion particles, to make the discovery. At an experiment called E787 at Brookhaven’s proton accelerator, the Alternating Gradient Synchrotron (AGS), the scientists discovered the rare mode in which a K meson decays to a pi meson and a neutrino-anitneutrino pair — a process with a probability of about one in ten billion. Finding this rare kaon decay sheds new light on the universe’s most elemental forces and most basic building blocks, as explained by the theory known as the Standard Model.

“I feel honored to have received this distinction from the AAAS,” Littenberg said. “The rare kaon decay program at the AGS was one of the most exciting and productive projects in the distinguished history of that accelerator, and I am proud to have played a role in making it a success.”

Littenberg earned a Ph.D. in physics from the University of California, San Diego in 1969, and he was a research associate at the university before joining Daresbury Laboratory in Cheshire, England, in 1970 as a senior research associate. He came to Brookhaven Lab in 1974 as an associate physicist. Named a senior physicist in 1989, he led the Electronic Detector Group for 18 years and became associate chair for high-energy physics in Brookhaven’s Physics Department in 2007. Littenberg won the Brookhaven Science & Technology Award in 2000. A Fellow of the American Physical Society, he received society’s W.K.H. Panofsky Prize, along with Bryman and Smith, in 2010 for the rare K decay discovery.