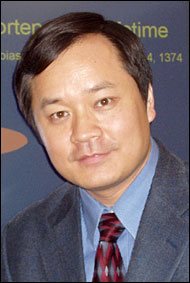 UPTON, NY — Xiaoliang Sunney Xie, Mallinckrodt Professor of Chemistry and Chemical Biology at Harvard University, will give a BSA Distinguished Lecture titled “Life at the Single Molecule Level,” at the U.S. Department of Energy’s Brookhaven National Laboratory on Friday, March 4, at 4 p.m. in Berkner Hall. BSA Distinguished Lectures are sponsored by Brookhaven Science Associates, the company that manages Brookhaven Lab, to bring topics of general interest before the Laboratory community and the public. The lecture is free and open to the public. Visitors to the Laboratory age 16 and over must bring a photo ID.

Xie and his team have made numerous, significant advances in single-molecule imaging of living bacterial cells. They are able to monitor the intricate processes of gene expression — converting information found in a gene to a protein — in a living cell as they occur. Some of their results are quite surprising. For example, they have been able to show how cells with identical genes can exhibit different characteristics.

The researchers found that rare events occurring in a single molecule can have important biological consequences. In his lecture, Xie will explain how his research has led to groundbreaking discoveries in biophysical chemistry and biology.

Xie earned a B.S. in chemistry from Peking University in 1984 and a Ph.D. in chemistry from the University of California at San Diego in 1990. He joined the University of Chicago as a postdoctoral fellow in 1990 and moved on to become a senior research scientist, and later chief scientist, at Pacific Northwest National Laboratory, from 1992 to 1998. He joined Harvard University in 1999 as a professor of chemistry, and he was named the Mallinckrodt Professor of Chemistry in 2009.

A Fellow of the American Association for the Advancement of Science, the American Physical Society, and the Biophysical Society, Xie has also won numerous awards, including the Coblentz Award in 1996, the Raymond and Beverly Sackler Prize in the Physical Sciences in 2003, the National Institutes of Health Director’s Pioneer Award in 2004, the Willis E. Lamb Award for Laser Science and Quantum Optics in 2007, the Berthold Leibinger Zukunftspreis for Laser Technology in 2008, and the E. O. Lawrence Award in Chemistry from the U.S. Department of Energy in 2009. He was elected to the American Academy of Arts and Sciences in 2008.