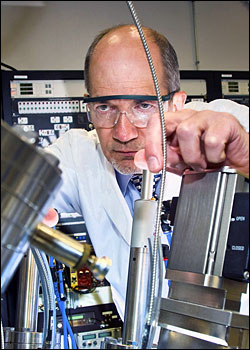 UPTON, NY — As part of an ongoing effort to uncover details of how high-temperature superconductors carry electrical current with no resistance, scientists at Johns Hopkins University and the U.S. Department of Energy’s Brookhaven National Laboratory have measured fluctuations in superconductivity across a wide range of temperatures using terahertz spectroscopy. Their technique allows them to see fluctuations lasting mere millionths of a millionth of a second, and reveals that these fleeting fluctuations disappear 10-15 Kelvin (K) above the transition temperature (Tc) at which superconductivity sets in.

“Our findings suggest that in cuprate superconductors, the transition to the non-superconducting state is driven by a loss of coherence among the electron pairs,” said Brookhaven physicist Ivan Bozovic, a co-author on a paper describing the results in Nature Physics online, February 13, 2011.

Scientists have been searching for an explanation of high-Tc superconductivity in cuprates since these materials were discovered some 25 years ago. Because they can operate at temperatures much warmer than conventional superconductors, which must be cooled to near absolute zero (0 K or -273 degrees Celsius), high- Tc superconductors have the potential for real world applications. If scientists can unravel the current-carrying mechanism, they may even be able to discover or design versions that operate at room temperature for applications such as zero-loss power transmission lines. For this reason, many researchers believe that understanding how this transition to superconductivity occurs in cuprates is one of the most important open questions in physics today.

To explore the phase transition, the Johns Hopkins-BNL team sought evidence for superconducting fluctuations above Tc.

“These fluctuations are something like small islands or droplets of superconductivity, within which the electron pairs are coherent, which pop up here and there and live for a while and then evaporate to pop up again elsewhere,” Bozovic said. “Such fluctuations occur in every superconductor,” he explained, “but in conventional ones only very, very close to Tc — the transition is in fact very sharp.”

Some scientists have speculated that in cuprates, on the contrary, superconducting fluctuations might exist in an extremely broad region, all the way up to the temperature at which the electron pairs form. In the present study, the scientists tackle this question head-on, by measuring the conductivity as a function of temperature and frequency up to the terahertz range.

“With this technique, one can see superconducting fluctuations as short-lived as one millionths of a millionth of a second — the shortest possible — and over the entire phase diagram,” Bozovic said.

The scientists studied a superconductor containing variable amounts of lanthanum and strontium layered with copper oxide. The samples were fabricated at Brookhaven, using a unique atomic-layer molecular beam epitaxy system that allows for digital synthesis of atomically smooth and perfect thin films. Terahertz spectroscopy measurements were performed at Johns Hopkins.

The central finding was somewhat surprising: The scientists clearly observed superconducting fluctuations, but these fluctuations faded out relatively quickly, within about 10-15 K above Tc, regardless of the lanthanum/strontium ratio.

“So, unlike in conventional superconductors, the transition in cuprates is not driven by electron (de)pairing but rather by loss of coherence between pairs — that is, by phase fluctuations,” Bozovic said. “The hope is that understanding this process in full detail may bring us one step closer towards cracking the enigma of high-temperature superconductivity.”

This research was supported by DOE’s Office of Science.