Identification of cellular mechanism may lead to novel and effective treatments

UPTON, NY — Scientists at the U.S. Department of Energy’s (DOE) Brookhaven National Laboratory, Cold Spring Harbor Laboratory, and the University of California, San Diego School of Medicine, have identified hyperactive cells in a tiny brain structure that may play an important role in depression. The study, conducted in rats and appearing in the February 24, 2011, issue of Nature, is helping to reveal a cellular mechanism for depressive disorders that could lead to new, effective treatments.

The research provides evidence that inhibition of this particular brain region — the lateral habenula — using implanted electrodes can reverse certain behaviors associated with depression, and also provides a mechanism to explain this effect. These findings lend support to the use of deep brain stimulation as a clinical treatment for people with long-standing, treatment-resistant depression. 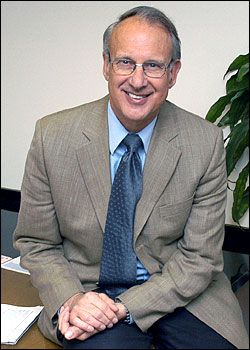 “This research identifies a new anatomical circuit in the brain that mediates depression, and shows how it interacts with the brain’s reward system to trigger a constant disappointment signal — which certainly would be depressing,” said Fritz Henn, a neurobiologist and psychiatrist at Brookhaven and Cold Spring Harbor laboratories and a co-investigator on the research. “But,” he added, optimistically, “identifying this circuit and how it works may open new doors to reversing these effects.”

For example, said co-investigator Roberto Malinow, a professor of neurosciences at the UCSD School of Medicine, “it’s possible that the genes specifically expressed in these neurons could be targeted genetically or pharmacologically in order to manipulate them and reduce depression.”

Scientists have known that cells in the lateral habenula are activated by negative or unpleasant events, including punishment and disappointment, such as when you don’t get an expected reward. It may seem intuitive that such negative stimuli can lead to depression, but not everyone who experiences disappointment collapses into a state of helplessness. To explore this connection, the scientists wanted to take a closer look at the brain circuits.

They examined the sensitivity of lateral habenula brain cells — particularly those that connect and send signals to the brain’s reward centers — in two animal models of “learned helplessness,” a form of depression, as well as in control animals that weren’t helpless.

Overall, the scientists found that these lateral habenula nerve cells were hyperactive in the depressed animals but not in the controls. Furthermore, the degree of hyperactivity coincided with the degree of helplessness.

To explore whether electrical stimulation could potentially reverse this reward-dampening effect, the researchers placed a stimulating electrode in the lateral habenula and measured the effects on the brain cells leading to the reward center. This was a study of rat brain cells that simulated the effects of deep brain stimulation, a technique that is currently being explored as a treatment for clinical depression, which has shown promising results. The scientists found that electrical stimulation of hyperactive habenula brain cells markedly decreased excitatory activity leading to the reward center.

Next the scientists tested to see if deep brain stimulation in living rats that exhibited helplessness would affect their behavior. The result was a marked reduction in helpless behavior that was dependent on both placement of the electrode in the lateral habenula (not adjacent brain regions), and the intensity of the stimulation.

“Our results clearly show that suppression of synaptic transmission at the lateral habenula through deep brain stimulation can acutely reverse helpless behavior in rats,” said Henn. “It’s very likely that this beneficial effect was mediated by a suppression of excitatory nerve cells leading to the brain’s reward system, as we observed in the cellular studies.”

“Our study provides a cellular mechanism that may explain the hyperactivity of lateral habenula nerve cells observed in depressed humans and animal models of depression, as well as why ‘silencing’ these circuits, whether surgically or pharmacologically, can reduce depression-like symptoms in animals,” Henn said.

Identifying these specific brain circuits and their dysfunction in depression may open the door to new effective treatments, including, potentially, lateral-habenula-targeted deep brain stimulation.

This research was supported through Laboratory Directed Research and Development funding at Brookhaven Lab, and by the Simons Foundation, the Dana Foundation, the National Institute of Mental Health, and a Shiley-Marcos endowment at UCSD.

All research involving laboratory animals at Brookhaven National Laboratory is conducted under the jurisdiction of the Lab’s Institutional Animal Care and Use Committee (IACUC) in compliance with the Public Heath Service (PHS) Policy on Humane Care and Use of Laboratory Animals, the U.S. Department of Agriculture's Animal Welfare Act, and the National Academy of Sciences’ Guide for the Care and Use of Laboratory Animals. This research has enhanced understanding of a wide array of human medical conditions including cancer, drug addiction, Alzheimer's and Parkinson's diseases, and normal aging and has led to the development of several promising treatment strategies.