Princeton University Biologist Bonnie Bassler to Give a Talk at Brookhaven Lab on Cell-to-Cell Communication in Bacteria, March 24 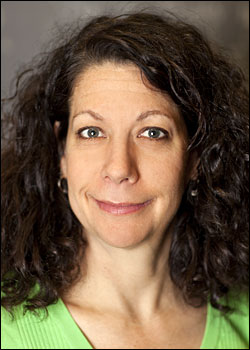 UPTON, NY — Bonnie Bassler, Howard Hughes Medical Institute investigator and Squibb Professor of Molecular Biology at Princeton University, will give a talk, titled “Tiny Conspiracies: Cell-to-Cell Communication in Bacteria,” at the U.S. Department of Energy’s Brookhaven National Laboratory on Thursday, March 24, at 4 p.m. in Berkner Hall. Sponsored by Brookhaven Women in Science, the talk is free, and no pre-registration is required. All visitors to the Laboratory age 16 and older must carry a photo ID.

Bassler made key insights into how bacteria communicate with one another in a process called “quorum sensing.” The bacteria use receptors on their surfaces that allow them to detect and respond to the buildup of chemical molecules that travel from cell to cell. Quorum sensing allows bacteria to perform in unison, rather than individually, so that they are more effective in performing functions such as forming spores or spreading infection. Bassler’s current research is focused on developing novel anti-bacterial therapies aimed at interfering with quorum sensing. Ideally, such therapies could be used to create an antibiotic that is effective in combating all kinds of disease-causing bacteria.

After earning a Ph.D. in biochemistry from The Johns Hopkins University in 1990, Bassler performed postdoctoral work in genetics at the Argouron Institute in La Jolla, California. She joined the Princeton faculty in 1994, and she became a Howard Hughes Medical Institute investigator in 2005.

Bassler was elected to the National Academy of Sciences in 2006 and to the American Academy of Arts and Sciences in 2007. She is also a fellow of the American Association for the Advancement of Science, the MacArthur Foundation, and the American Academy of Microbiology. Bassler has won numerous awards for her work, including the Theobold Smith Society Waksman Award and the New Jersey R&D Council’s Thomas Edison Patent Award for Medical Technology, both in 2003; the “Inventor of the Year” award from the New York Intellectual Property Lawyers Association in 2004; the American Society for Microbiology Eli Lilly and Company Research Award in 2006; Princeton University’s Distinguished Teaching Award and the World Cultural Council Award for Scientific Merit, both in 2008; and the Wiley Prize in Biomedical Sciences in 2009.

Call 631 344-2345 for more information. The Lab is located on William Floyd Parkway, one-and-a-half miles north of Exit 68 of the Long Island Expressway.