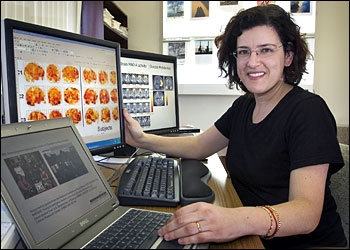 UPTON, NY — A study conducted at the U.S. Department of Energy’s (DOE) Brookhaven National Laboratory demonstrated that drug addicted individuals who have a certain genetic makeup have lower gray matter density — and therefore fewer neurons — in areas of the brain that are essential for decision-making, self-control, and learning and memory.

Nelly Alia-Klein, a study coauthor who is a Brookhaven Lab medical scientist, said, “This research shows that genes can influence the severity of addiction. The results suggest that addicted individuals with low MAOA [monoamine oxidase A] genotype may need a different kind of treatment than other addicted individuals who carry the high MAOA genotype. More studies need to be conducted before implementing changes in treatment strategies. However, addiction treatment professionals and others who manage addicted individuals, such as probation officers and judges, should be informed of these and other new findings in the neurobiology of drug addiction.”

In addition, the current study found that the pattern of low gray matter was correlated with the number of years of alcohol, cocaine and cigarette use in the addicted group. The longer cocaine, alcohol, and cigarettes were abused, the lower gray matter was found in the hippocampus and frontal regions of the brain. This result means that curtailing drug use may be protective against such brain changes.

The scientists recruited 82 men — 40 addicted to cocaine and 42 controls — for the study using advertisements in local newspapers and from local treatment centers. All the participants provided informed consent in accordance with the local institutional review board. They were given physical/neurological, psychiatric and neuropsychological examinations, including tests of intellectual functioning, and the researchers determined that all the men were healthy and not taking medication.

To determine the genotype of each participant, the scientists took DNA samples and analyzed them for the presence of high or low MAOA. The researchers also scanned the subjects’ brains using magnetic resonance imaging, and a method called voxel-based morphometry enabled the researchers to determine the proportion/density of gray matter (as an estimation of neuron density) in the whole brain. The gray matter volume was then compared between the groups and correlated with genetic type and duration of drug use.

“Only males were part of this study and therefore it is important for future studies to examine these genetic and brain effects in females as well,” Klein explained. “Also, further studies will have to be done to track these gene-brain-behavior patterns throughout a lifespan that influence the volume of the brain’s neurons.”