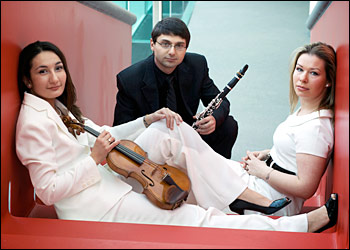 UPTON, NY — The Prima Trio — consisting of a clarinetist, violin/viola player, and pianist — will perform at the U.S. Department of Energy’s Brookhaven National Laboratory on Wednesday, April 13, at noon in Berkner Hall. Sponsored by Brookhaven Science Associates, the company that manages the Laboratory, the concert is free and open to the public. All visitors to the Laboratory age 16 and older must bring a photo ID.

Since winning the coveted Fischoff National Chamber Music Competition’s Grand Prize and Gold Medal in 2007, the Prima Trio has performed more than 150 concerts worldwide to great critical acclaim. The trio distinguishes itself not only with its skillful playing, but also through the repertoire it performs, from Mozart to Schickele, in addition to arrangements of Piazzolla and Lotti by the clarinetist. The program for Brookhaven Lab consists of works by Schumann, Milhaud, Khachaturian, and Schickele.