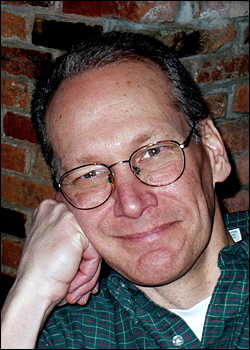 At 7 p.m. on Thursday, June 9, in Brookhaven’s Berkner Hall, Mayor will read excerpts from Red Herring, a Vermont-based story that centers around the discovery of single drops of blood found at the scene of three seemingly unrelated murders. Mayor also will explain why, when conventional forensics lead the book’s detectives to a dead end, they take their evidence to Brookhaven’s National Synchrotron Light Source (NSLS).

In Mayor’s book — and in real life — thousands of scientists from around the world visit NSLS every year to use its extremely bright beams of x-ray, ultraviolet, and infrared light to study everything from renewable energy technologies to proteins vital for human life. NSLS also has been used to investigate forensic mysteries, including the rapid disappearance of children’s fingerprints from surfaces and the prevalence of lead poisoning in ancient cultures.

During the event, Brookhaven Lab researchers will discuss these studies and explore how tomorrow’s light sources — such as the National Synchrotron Light Source II, now under construction at Brookhaven — could be even more beneficial to law enforcement.

Mayor is the 2004 New England Book Award winner for fiction and a Fellow of the Vermont Academy of Arts and Sciences. Mayor also works as a death investigator for the Vermont State Medical Examiner’s Office and as a deputy for the Windham County Sheriff’s Department.

The Laboratory is located on William Floyd Parkway (County Road 46), one-and-a-half miles north of Exit 68 of the Long Island Expressway. All visitors age 16 and older must bring a photo ID.