The following news release is being issued by the U.S. T2K collaboration at the Japan Proton Accelerator Research Complex (J-PARC). The experiment has found evidence for a new type of transformation between neutrinos, ghostlike elementary particles that zip through the Earth at a rate of 400 billion per second. Scientists at the U.S. Department of Energy’s Brookhaven National Laboratory built a key part of the T2K experiment: five dipole (two-pole) “corrector” magnets. Made with a special 3-D winding machine – technology that allowed BNL engineers to use smaller and more efficient cable – these superconducting magnets are sandwiched between 28 “bending” magnets that drive an intense beam of protons into a stationary target. This high-speed impact creates a shower of particles, some of which decay to neutrinos. Together, the two types of magnets keep the protons tightly packed as they speed toward the target. Weighing about 500 pounds each, the meter-long corrector magnets were shipped to Japan from Brookhaven in 2008. For more information about Brookhaven’s role, contact Kendra Snyder, ksnyder@bnl.gov, 631-344-8191, or Peter Genzer, genzer@bnl.gov, 631-344-3174.

The international T2K collaboration announced today that they have observed an indication of a new type of neutrino transformation or oscillation from a muon neutrino to an electron neutrino. 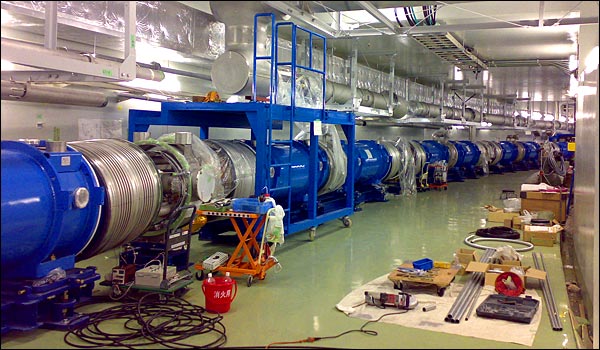 Neutrinos come in three types, or “flavors”: electron, muon, and tau. In the T2K experiment in Japan, a muon neutrino beam was produced in the Japan Proton Accelerator Research Complex, called J-PARC, located in Tokai village, Ibaraki prefecture, on the east coast of Japan, and was aimed at the gigantic Super-Kamiokande underground detector in Kamioka, near the west coast of Japan, 295 km (185 miles) away from Tokai. An analysis of the detected neutrino-induced events in the Super-Kamiokande detector indicates that a very small number of muon neutrinos traveling from Tokai to Kamioka (T2K) transformed themselves into electron neutrinos. 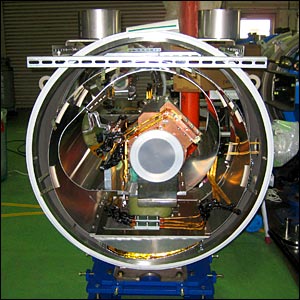 A corrector magnet installed in a piece of the T2K beamline

Evidence of this new type of neutrino oscillation may lead the way to new studies of a matter-antimatter asymmetry called charge-parity (CP) violation. This phenomenon has been observed in quarks (for which Nobel prizes were awarded in 1980 and 2008), but never in neutrinos. CP violation in the early Universe may be the reason that the observable universe today is dominated by matter and no significant anti-matter. If the T2K result does indicate this third oscillation, then a search for this CP violation in neutrinos will be a major scientific quest in the coming years. Further steps toward this goal will continue to require global scientific collaborations, like T2K, to overcome the significant technical challenges in this search.

The T2K experiment utilizes the J-PARC complex that accelerates protons onto a target to produce an intense secondary particle beam that is focused by special magnets called neutrino horns. The focused particle beam decays into a beam of neutrinos, which is monitored by a neutrino detector 280 meters from the target. This beam of neutrinos travels 295 km underground to be detected in the Super-Kamiokande detector. 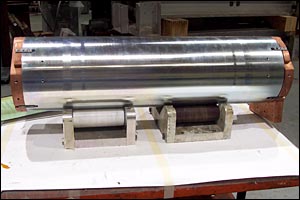 The work of the T2K experiment is located in Japan and primarily supported by the Japanese Ministry of Education, Culture, Sports, Science and Technology. However, the experiment was constructed and is operated by an international collaboration, which consists of about 500 physicists from 59 institutions in 12 countries (Japan, US, UK, Italy, Canada, Korea, Switzerland, Spain, Germany, France, Poland, and Russia). The data collected by the experiment is also analyzed by the collaboration. The US T2K collaborating team consists of approximately 70 members (Boston University, Brookhaven National Lab, UC Irvine, University of Colorado, Colorado State University, Duke University, Louisiana State University, Stony Brook University, University of Pittsburgh, University of Rochester, and University of Washington [Seattle]) is funded by the US Department of Energy, Office of Science. The US groups have built superconducting corrector magnets, proton beam monitor electronics, the 2nd neutrino horn, and a GPS time synchronization system for the T2K neutrino beam line; and a pi-zero detector and a side muon range detector (partial detector) in the T2K near detector complex. They also are part of the team that built, upgraded, and operates the Super-Kamiokande detector.

The March 2011 earthquake in eastern Japan caused damage to the accelerator complex at JPARC, and the data-taking run of the T2K experiment was abruptly discontinued. Fortunately, however, no scientists working on T2K or technical staff supporting their work were injured in the earthquake or its aftermath. The T2K experiment will be ready to take data when J-PARC resumes its operation, which is planned to occur at the end of 2011.

More details on this measurement have been provided in a press report at http://www.kek.jp/intra-e/press/2011/J-PARC_T2Kneutrino.html.

Media Contacts:
(For contacts in Japan, see above press release)