The following news release is being issued by the U.S. Department of Energy’s Fermi National Accelerator Laboratory about evidence from the MINOS experiment for a rare transformation between two types of neutrinos, uncharged elementary particles created by the sun, cosmic rays, and nuclear reactors and accelerators. Scientists from Brookhaven National Laboratory have played a leading role in the evolution of the U.S. accelerator neutrino program since the early 1990s and are heavily involved in the MINOS experiment. The BNL research group working on MINOS includes Mary Bishai, Milind Diwan (PI), David Jaffe, Jiajie Ling, Brett Viren, and Lisa Whitehead. In addition to participating in the conceptual development of MINOS, Brookhaven scientists conduct data analysis and assist with daily operation and monitoring. Mary Bishai leads the effort for monitoring the instrumentation that guides the 450-mile-long neutrino beam and coordinates the team charged with making precision measurements of the muon neutrino beam – an important requirement needed to search for transformations of muon neutrinos. BNL physicists Milind Diwan and Brett Viren were early proponents of the physics of the rare transformations of muon to electron neutrinos and the difficult data analysis behind MINOS’s search for this physics. The results detailed below were presented by Brookhaven physicist Lisa Whitehead, who is one of the analysis coordinators for this measurement. For more information about Brookhaven’s role, contact Kendra Snyder, 631-344-8191, ksnyder@bnl.gov, or Peter Genzer, 631-344-3174, genzer@bnl.gov. 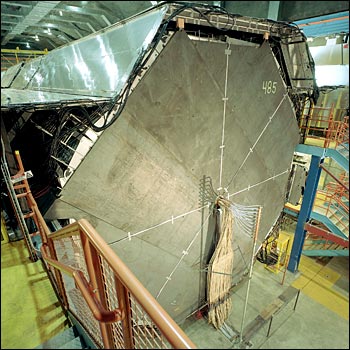 The MINOS far detector is located in a cavern half a mile underground in the Soudan Underground Laboratory, Minnesota. The 100-foot-long MINOS far detector consists of 486 massive octagonal planes, lined up like the slices of a loaf of bread. Each plane consists of a sheet of steel about 25 feet high and one inch thick, with the last one visible in the photo. The whole detector weighs 6,000 tons. Since March 2005, the far detector has recorded neutrinos from a beam produced at Fermilab. The MINOS collaboration records about 1,000 neutrinos per year. A tiny fraction of them seem to be electron neutrinos.

Scientists of the MINOS experiment at the Department of Energy’s Fermi National Accelerator Laboratory announced today (June 24) the results from a search for a rare phenomenon, the transformation of muon neutrinos into electron neutrinos. The result is consistent with and significantly constrains a measurement reported 10 days ago by the Japanese T2K experiment, which announced an indication of this type of transformation.

The results of these two experiments could have implications for our understanding of the role that neutrinos may have played in the evolution of the universe. If muon neutrinos transform into electron neutrinos, neutrinos could be the reason that the big bang produced more matter than antimatter, leading to the universe as it exists today.

To measure the transformation of muon neutrinos into other neutrinos, the MINOS experiment sends a muon neutrino beam 450 miles (735 kilometers) through the earth from the Main Injector accelerator at Fermilab to a 5,400-ton neutrino detector, located half a mile underground in the Soudan Underground Laboratory in northern Minnesota. The experiment uses two almost identical detectors: the detector at Fermilab is used to check the purity of the muon neutrino beam, and the detector at Soudan looks for electron and muon neutrinos. The neutrinos’ trip from Fermilab to Soudan takes about 2.4 miliseconds, giving the neutrinos enough time to change their identities.

For more than a decade, scientists have seen evidence that the three known types of neutrinos can morph into each other. Experiments have found that muon neutrinos disappear, with some of the best measurements provided by the MINOS experiment. Scientists think that a large fraction of these muon neutrinos transform into tau neutrinos, which so far have been very hard to detect, and they suspect that a tiny fraction transform into electron neutrinos.

The observation of electron neutrino-like events in the detector in Soudan allows MINOS scientists to extract information about a quantity called sin^2 2 theta-13 (pronounced sine squared two theta one three). If muon neutrinos don’t transform into electron neutrinos, this quantity is zero. The range allowed by the latest MINOS measurement overlaps with but is narrower than the T2K range. MINOS constrains this quantity to a range between 0 and 0.12, improving on results it obtained with smaller data sets in 2009 and 2010. The T2K range for sin^2 2 theta-13 is between 0.03 and 0.28.

“MINOS is expected to be more sensitive to the transformation with the amount of data that both experiments have,” said Fermilab physicist Robert Plunkett, co-spokesperson for the MINOS experiment. “It seems that nature has chosen a value for sin^2 2 theta-13 that likely is in the lower part of the T2K allowed range. More work and more data are really needed to confirm both these measurements.”

The MINOS measurement is the latest step in a worldwide effort to learn more about neutrinos. MINOS will continue to collect data until February 2012. The T2K experiment was interrupted in March when the severe earth quake in Japan damaged the muon neutrino source for T2K. Scientists expect to resume operations of the experiment at the end of the year. Three nuclear-reactor based neutrino experiments, which use different techniques to measure sin^2 2 theta-13, are in the process of starting up.

“Science usually proceeds in small steps rather than sudden, big discoveries, and this certainly has been true for neutrino research,” said Jenny Thomas from University College London, co-spokesperson for the MINOS experiment. “If the transformation from muon neutrinos to electron neutrinos occurs at a large enough rate, future experiments should find out whether nature has given us two light neutrinos and one heavy neutrino, or vice versa. This is really the next big thing in neutrino physics.”

The MINOS experiment involves more than 140 scientists, engineers, technical specialists and students from 30 institutions, including universities and national laboratories, in five countries: Brazil, Greece, Poland, the United Kingdom and the United States. Funding comes from: the Department of Energy Office of Science and the National Science Foundation in the U.S., the Science and Technology Facilities Council in the U.K; the University of Minnesota in the U.S.; the University of Athens in Greece; and Brazil's Foundation for Research Support of the State of São Paulo (FAPESP) and National Council of Scientific and Technological Development (CNPq).

Fermilab is a national laboratory supported by the Office of Science of the U.S. Department of Energy, operated under contract by Fermi Research Alliance, LLC.

Photos and illustrations are available at: