Using the Sun's Power to Meet the World's Energy Needs 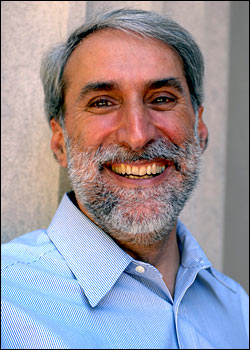 UPTON, NY — Daniel Nocera, a Massachusetts Institute of Technology (MIT) professor whose recent research focuses on solar-powered fuels, will give a BSA Distinguished Lecture, titled "Harnessing Energy from the Sun for Six Billion People — One at a Time," on Thursday, September 8, at 4 p.m. in Berkner Hall at the U.S. Department of Energy's (DOE) Brookhaven National Laboratory. BSA Distinguished Lectures are sponsored by Brookhaven Science Associates, the company that manages Brookhaven Lab, to bring topics of general interest before the Laboratory community and the public. The lecture is free, and no preregistration is required. All visitors to the Laboratory 16 and older must bring a photo ID.

Nocera will explain that the world population is expected to double by 2050, increasing to about six billion people, mainly from developing nations. Thus, global energy consumption is expected to rise from 14 to 30 terawatts, or trillion watts.

Nocera suggests that building small, "personalized" energy systems that rely on the sun's energy will be an economical, efficient, and environmentally friendly way to meet these ever-increasing energy needs.

He and his research team have found a way to harness solar energy through artificial photosynthesis — mimicking the way plants turn sunlight into energy. They have developed a device called an "artificial leaf" that can be used to power a home in the developing world. Made of nickel, silicon, and cobalt, the device is smaller than an oak leaf.

Nocera will show a brief film to demonstrate how the device works. The artificial leaf is placed in a glass of water and is irradiated by the sun. A specially designed catalyst in the device enables it to split water into hydrogen and oxygen gases. The gases can then be combined in a fuel cell to create clean fuel and electricity. Nocera says this simple method can power a home in a developing nation, using two bottles of water.

Nocera earned a B.S. in chemistry from Rutgers University in 1979 and a Ph.D. in chemistry from the California Institute of Technology in 1984. He joined the faculty of Michigan State University in 1983 and moved to MIT as a chemistry professor in 1997. He is currently MIT's Henry Dreyfus Professor of Energy, and the director of both the Solar Revolutions Project and the Eni Solar Frontiers Center at MIT. In 2008, Nocera founded Sun Catalytix, a company committed to bringing personalized energy to the developing world.

A member of the American Academy of Sciences and the U.S. National Academy of Sciences, Nocera was named in 2009 as one of Time magazine's "100 Most Influential People in the World." He is a frequent guest on television and radio, and is regularly featured in popular print publications. Nocera has been an organizer to and primary author of the DOE Basic Research Need workshops on hydrogen, solar energy, energy storage, and catalysis. He was also the lead author of several reports on energy for DOE and MIT. Nocera has won numerous awards for his energy research, including, most recently, the American Chemical Society's Inorganic Chemistry Award (2009), the United Nations Science and Technology Award (2009), and the American Crystallographic Association's Elizabeth Wood Award (2010).