UPTON, NY — Brookhaven Science Associates, the company that manages Brookhaven National Laboratory for the U.S. Department of Energy (DOE), has signed a four-year mentor-protégé agreement with Meadowbrook Partners, Inc. to develop business opportunities for a tracer technology that measures air quality and flow. The agreement is designed to enhance Meadowbrook’s business and/or technical capabilities, while giving the company the opportunity to become a successful subcontractor to the Laboratory and eventually work with other government agencies and private industry. 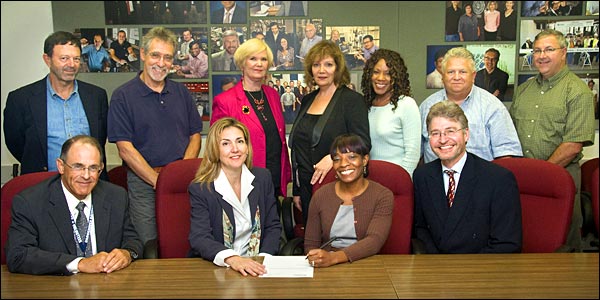 Meadowbrook, a woman-owned small business based in Wading River, New York, will be the sole subcontractor for the Lab for the duration of the agreement to promote perfluorocarbon tracers (PFTs) that were pioneered at Brookhaven Lab and are used widely in industry today. The Lab’s researchers and small business experts will offer guidance to Meadowbrook on technical issues and business capabilities, including business and proposal development, networking with potential customers, packaging and tracking inventory, report writing, and various other business tasks.

PFTs are colorless, odorless, nontoxic gases that can test airflow and detect if a material is present before it becomes dangerous to humans or the atmosphere. PFT technology allows for the simultaneous release, sampling, and testing of up to eight distinct perfluorocarbon tracers. In one application, Brookhaven Lab has been using PFTs for testing control rooms in nuclear power reactors to be sure they meet Nuclear Regulatory Commission requirements for safety. In case of an accident, a reactor control room must be almost completely airtight to ensure that radiation does not leak into it and contaminate workers and equipment. Control rooms in reactors must be tested at least every six years to validate that they are sealed. 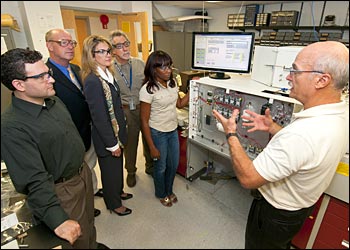 “So far, we’ve tested control rooms in six nuclear reactors,” said Paul Kalb, division head for Environmental Research and Technology at Brookhaven Lab, “but there is a wider market for this type of testing using PFT tracers, and not just for nuclear power plants.

We can conduct air exchange studies in large buildings to test energy efficiency, or find out what buildings might be best to shelter in place in case of terrorist attack. A simple use might be a test to detect the origin of an unwanted odor in a building.”

Meadowbrook President Janet Godfrey said, “I am grateful for this opportunity to have access to the remarkable talent at Brookhaven Lab. Meadowbrook will be able to promote the Lab’s technology, interface with clients, and handle the business aspects of using the technology, so that Lab scientists and engineers can free up their time to concentrate on technical analysis and research.”

The mentor-protégé contract will allow Meadowbrook to purchase equipment for PFT testing from Brookhaven Lab, and the Lab will train Meadowbrook personnel to conduct the tests, while sample analysis will be done at the Laboratory. With over 400 nuclear reactors in the world — 104 of them in the U.S. — and numerous additional uses for the technology, the market for PFT testing is very promising.

DOE initiated a pilot mentor-protégé program in 1995, and it became an established DOE-sponsored program in 2000. DOE requires that Brookhaven Science Associates, on behalf of Brookhaven Lab, has at least one mentor-protégé program in place for as long as the contract to manage the Lab is in place. Said Evelyn Landini, DOE Brookhaven Site Office, “DOE believes that small businesses are the backbone of innovation, and the protégé will introduce Brookhaven Lab to new ideas and services that will be helpful to the Lab. In turn, the Laboratory has the expertise to help a small business mature and be able to sell their products to government contractors, as well as other businesses.”

Meadowbrook is the third protégé that Brookhaven Lab has agreed to mentor. Previously, 3 Gals Industrial LLC, a safety supply company, entered into a two-year contract with the Laboratory, and currently, a three-year contract is ongoing until November 2012 with an engineering consultant company, Klasm International, Inc.

Mentor firms are exclusively responsible for selecting protégés. To become a protégé of Brookhaven Lab or another DOE contractor, a protégé firm must be a small business that is able to receive government contracts and has been in business for at least two years. In addition, the small business must be certified as economically or socially disadvantaged and known as an “8a” business by the U.S. Small Business Administration, or women-owned, or service disabled veteran-owned, or located in a historically underutilized business zone. Historically black colleges or universities, or other minority institutions of higher learning are also eligible to apply.