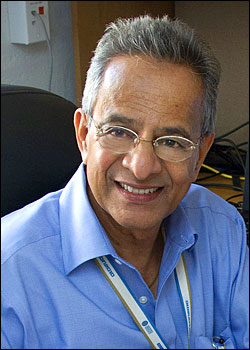 UPTON, NY — Suresh Babu, a manager in the Global and Regional Solutions Directorate at the U.S. Department of Energy’s Brookhaven National Laboratory, has received the Don Klass Award for Excellence in Thermochemical Conversion Science from the Gas Technology Institute (GTI). He was honored at the organization’s conference dinner at the Art Institute of Chicago on September 28.

GTI is a nonprofit research and development organization that develops, demonstrates, and licenses new energy technologies, with particular focus on the natural gas industry. Thermochemical conversion science refers to the conversion of biomass to fuel, chemicals, and power.

With 38 years of research and development experience in advanced coal and biomass energy conversion, Babu joined Brookhaven Lab in 2010 as a senior program and business development manager. He is currently developing a biomass thermochemical conversion research program at the Laboratory to explore innovations in efficient and economical conversion of biomass to fuels, chemicals, and power in the northeastern U.S.

“I chose to join Brookhaven Lab because of its excellent facilities, including the Center for Functional Nanomaterials and the National Synchrotron Light Source, and its expertise in energy-related research,” Babu said. “These capabilities will help researchers overcome the remaining technical and economic barriers to biomass conversion to fuel, chemicals, and power. This accomplishment would eliminate the nation’s dependence on nonrenewable fossil fuels.”

After earning his doctoral degree, Babu began his career at the School of Mines at West Virginia University in 1971. Two years later, he joined the Institute of Gas Technology (IGT), as a chemical engineer and moved through the ranks to become assistant vice president, research and deployment. Babu played a key role in IGT’s merging with the Gas Research Institute to form GTI. He worked for IGT/GTI until 2006, leading the development of coal and biomass gasification technologies and technology transfer efforts, among other leadership roles.

In 2006, Babu returned to India to become the CEO and director of technology development for TERI Technologies, Ltd., a not-for-profit research and development organization in Delhi, and in 2009, he joined the Battelle Science and Technology Division in Bangi, and Kuala Lumpur, Malaysia, working as senior lead, thermochemical technologies, until he assumed his current position at Brookhaven Lab.