Medal of Science Winner Joanna Fowler to Speak on 'Positron Emission Tomography and Diseases of Addiction' at Brookhaven Lab, October 27 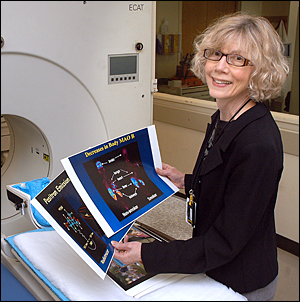 UPTON, NY — Joanna Fowler, a senior chemist and director of radiotracer chemistry, instrumentation, and biological imaging at the U.S. Department of Energy’s (DOE) Brookhaven National Laboratory (BNL), will give a talk titled “Positron Emission Tomography and Diseases of Addiction” on Thursday, October 27, at 4 p.m. in BNL’s Hamilton Seminar Room, Bldg. 555. Sponsored by Brookhaven Women in Science, the public talk is free, and no registration is required. All visitors to the Laboratory age 16 and over must bring a photo ID.

Fowler has made significant contributions to brain research and the understanding of diseases such as addiction, which she studies using positron emission tomography (PET), an imaging technique that measures the concentration and movement of a positron-emitting radioisotope in living tissue. When the radioisotope is incorporated into a molecule that is targeted to a specific element in a cell, such as an enzyme, or incorporated into a drug molecule, PET can provide information on biochemical changes or the movement of drugs in the living human body — including the brain, which is important for investigating addiction.

In 1976, Fowler and colleagues synthesized 18F-fluorodeoxyglucose (FDG), a PET radiotracer. Today, FDG is widely used in hospitals and research centers throughout the world to diagnose and study neurological and psychiatric diseases and diagnose cancer. In her talk, Fowler will highlight examples of the development and applications of radiotracers to measure drug action in the human brain. She will also discuss new radiotracer methods that will serve as scientific tools for advancing molecular imaging and knowledge of the human brain.

A member of the National Academy of Sciences (NAS), Fowler has won numerous awards for her research, including the American Chemical Society’s Distinguished Women in Chemistry/Chemical Engineering Award in 2011; the National Medal of Science, the NAS Award in Chemical Sciences, the New York State Distinguished Woman Award, and induction into the Long Island Technology Hall of Fame, all in 2009; the Glen T. Seaborg Award for Nuclear and Radiochemistry in 2002; the Francis P. Garvan-John M. Olin Medal in 1998; the Society for Nuclear Medicine’s Paul C. Aebersold Award and DOE’s E. O. Lawrence Award in 1997; and the Esselen Award for Chemistry in the Public Interest in 1988.

A faculty member of the Mount Sinai School of Medicine and Stony Brook University, Fowler has mentored dozens of chemists and other imaging scientists. She is also a member of numerous advisory boards and editorial boards. Fowler has published approximately 350 peer-reviewed articles and holds eight patents for radiolabeling procedures.