One of nine groups to receive Secretary’s Achievement Honor Award 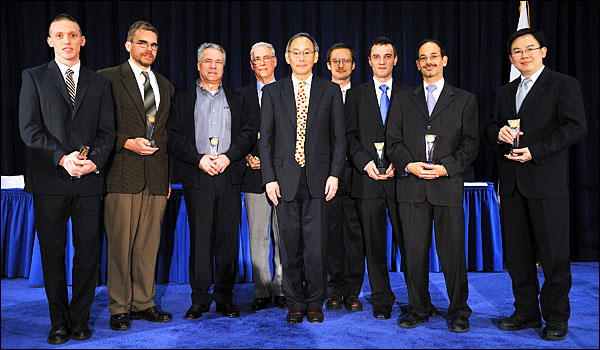 The Honor Awards represent the highest internal non-monetary recognition given to DOE employees and contractors for providing exceptional service to the Department and the American people. The Achievement Honor Award is given to groups or teams for their outstanding accomplishments and contributions. The RACF team is one of nine groups and several individuals recognized this year at a ceremony held today at DOE headquarters in Washington, D.C.

The award recognizes the RACF team’s “outstanding performance” in serving the experimental physics programs at the Relativistic Heavy Ion Collider (RHIC) — a particle accelerator located at Brookhaven Lab where scientists from around the world explore fundamental forces, the properties of matter, and the conditions of the early universe by colliding heavy ions such as gold — and the ATLAS experiment, located at the Large Hadron Collider at CERN, the European particle physics laboratory, which aims to discover why some particles have mass and the source of dark matter.

“The employees recognized today have gone above and beyond the call of duty, demonstrating an exceptional commitment to public service,” said Secretary Chu. “Their dedication, knowledge and skills have served to strengthen our nation’s economic and energy security and the work of the Energy Department.”

As stated in the Honor Awards program, “The accomplishments of this staff have allowed scientists to perform computations of unprecedented scope, and coordinated data flow and management for thousands of scientists in 38 countries from 172 institutions around the world.”

In addition to providing all data storage and access for research at RHIC, the RACF serves as the sole Tier-1 computing facility for ATLAS in the U.S., and is the largest ATLAS computing center worldwide. When both RHIC and ATLAS are conducting research, data streams into the RACF at a rate of 4 to 5 gigabytes per second. Some 12,000 computational processing units (CPUs) sift through 1.3 petabytes of data per day, store up to 50 terabytes on tape, and distribute a fraction of the processed data to collaborators around the U.S. and overseas. In 2010 alone, data collected from RHIC and ATLAS filled 7,000 tapes with the storage equivalent of 7 million CDs — a pile 10 miles high.

“Our staff has to make sure everything is running smoothly 24 hours a day, seven days a week, and we have a commitment to the scientific community to respond to any problems within two hours,” said Brookhaven computational scientist Michael Ernst, who manages the RACF. “That is quite challenging given the complexity and the number of components we are running. But our team does whatever is required.”

The award description further notes that the RACF team’s dedication and commitment to excellence have resulted in “significant operational efficiencies and cost savings while continuing to improve the performance and capacity of the facility.”

Ernst explains that having one facility to manage the data from both research programs with overlapping services has been one key to that success. And the savings in cost and efficiency will serve the scientific community for years to come.

“We’re continuing to add storage and computing capacity each year to keep up with the ever-growing data stream, and our staff is ready to meet the challenges of the future,” Ernst said.

The RACF is funded by the DOE Office of Science.