The Horszowski Trio to Perform at Brookhaven Laboratory, 11/30 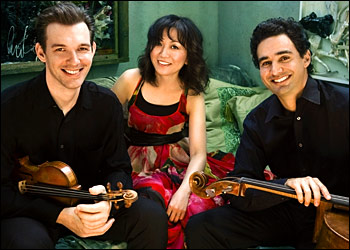 UPTON, NY — The Horszowski Trio will perform at the U.S. Department of Energy's Brookhaven National Laboratory on Wednesday, November 30, at noon in Berkner Hall. Sponsored by Brookhaven Science Associates, the company that manages the Lab, the concert is free and open to the public. All visitors to the Laboratory 16 and older must bring a photo I.D.

The Horszowski Trio is named after the legendary pianist, Mieczyslaw Horszowski (1892-1993), in honor of his musicianship, integrity, and sincerity. It is comprised of two-time Grammy nominee violinist Jesse Mills (former founding cellist of the prize-winning Daedalus Quartet), Raman Ramakrishnan, and pianist Rieko Aizawa. Aizawa was Horszowski’s last pupil at the Curtis Institute. Upon being discovered by the late violinist and conductor Alexander Schneider, Aizawa played her first performances at the Kennedy Center and Carnegie Hall.

These New York-based musicians formed strong musical and personal bonds at the Marlboro Music Festival and the Juilliard School. When Mills, Ramakrishnan, and Aizawa played together for the first time, they said they immediately felt the spark of a unique musical connection. Building upon their individual accomplishments, they formed the Horszowski Trio in 2011. Their unspoken trust in each other is remarkable. The Trio’s mission is to unify its voice with that of the composer, in an attempt to illuminate the soul of each composition.

For their BNL appearance the trio will perform two very popular works from their repertoire: Beethoven's "Ghost Trio," and the "Trio in F minor by Dvorak."