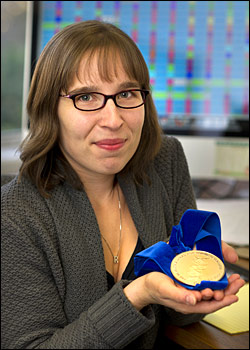 UPTON, NY — Ruth Van de Water, an assistant physicist at the U.S. Department of Energy’s Brookhaven National Laboratory, has been named a finalist in the postdoctoral category of the New York Academy of Sciences’ Blavatnik Awards for Young Scientists. Established in 2007 by the Blavatnik Family Foundation, the prestigious awards program recognizes researchers who make innovative, impactful, and interdisciplinary advances in the life and physical sciences, mathematics, and engineering.

Van de Water, who was a postdoctoral fellow at Brookhaven Lab from 2008 to September 2011, was one of six postdoctoral fellows and seven university faculty members chosen as finalists out of 150 high-caliber applications. Of those, four were chosen as winners. At the New York Academy of Sciences’ gala on November 14, Van de Water was given a medal and $5,000, the award for postdoctoral finalists. Her citation honors her for “Numerical computations needed to search for new particles and laws of physics at high-energy collider experiments.”

“I was surprised and honored to receive this recognition for my work,” Van de Water said. “The Standard Model of particle physics was established more than 30 years ago, and it has been remarkably successful in describing experimental observations of the elementary particles and their interactions. But the theory does not explain everything that we see, such as dark matter, dark energy, or neutrino masses.

“So now experimentalists, as well as theorists like myself, are looking for ‘new physics’ to explain these phenomena. One way to do this is to try to produce new elementary particles directly at high-energy collider experiments such as at the Large Hadron Collider. Another is to make very precise experimental measurements and look for deviations from Standard Model predictions. To do so, we need equally precise numerical computations of the theoretical predictions to compare with the precise experimental measurements. I perform these numerical computations.”

In her research, Van de Water uses powerful supercomputers, such as the New York Blue supercomputer, the centerpiece of the New York Center for Computational Sciences located at Brookhaven Lab, and computing facilities at both Argonne and Fermi National Laboratories, to make numerical computations for formulating precise theoretical predictions. Specifically, she makes these calculations using lattice quantum chromodynamics (QCD), a mathematical formulation of subnuclear interactions in which discrete points in space-time are represented by a four-dimensional lattice.

Van de Water has used lattice QCD to determine the behavior and properties of particles called B mesons and kaons. Her calculations are needed to interpret the experimental results of B-factory accelerators, including the electron-positron colliders at SLAC National Accelerator Laboratory in California and at KEK in Japan. According to Van de Water, she and others have found slight discrepancies between experimental observations at these colliders and the predictions of the Standard Model, which may be early hints of new physics, but it is too soon to tell.

Van de Water earned a B.S. in physics from the College of William and Mary in 2000, and a Ph.D. in physics from the University of Washington, Seattle, in 2005. She was a postdoctoral research associate at Fermi National Accelerator Laboratory from 2005 to 2008 before joining Brookhaven Lab as a Goldhaber Distinguished Fellow in 2008. In 2011, she became an assistant physicist at Brookhaven. Van de Water has been honored with several awards from the University of Washington, Seattle, and the College of William and Mary for her outstanding research and academic achievement. She also was a Massachusetts Institute of Technology Pappalardo Fellowships in Physics finalist in 2007.