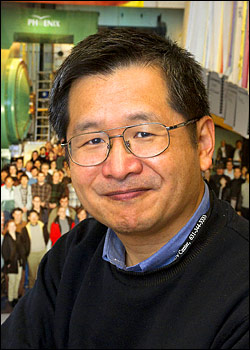 UPTON, NY — Yasuyuki Akiba, experimental group leader of the RIKEN BNL Research Center at the U.S. Department of Energy’s Brookhaven National Laboratory and vice chief scientist at the RIKEN Nishina Center in Japan, has been named the recipient of the 2011 Nishina Memorial Prize, given annually by the Nishina Memorial Foundation since 1955 to young physicists for their achievements in the fields of atomic and subatomic physics. Akiba will receive the award – a medal and approximately $6,500 – at a ceremony in Tokyo, Japan, on December 6.

Akiba said, “I am honored to receive this prestigious award, and I would like to thank all my colleagues at PHENIX, RIKEN, and Brookhaven Lab who have helped with this research over several years. I am very pleased that our perseverance has resulted in some very significant results.”

Through studies of collisions of gold ions traveling at nearly the speed of light at Brookhaven’s world-class accelerator, the Relativistic Heavy Ion Collider (RHIC), physicists reported in 2005 that the early universe, just microseconds after the Big Bang, consisted of a freely flowing liquid of quarks and gluons called “quark-gluon plasma.” This substance has been dubbed a “perfect” liquid because it has almost no frictional resistance or viscosity. This was a surprising finding, since predictions made prior to RHIC’s initial operations in 2000 expected that the early universe would be composed of a gas.

Akiba and his collaborators at PHENIX measured the temperature of the hot matter by looking at the color, or energy distribution, of light (photons) emitted from it, similar to the way one can tell the temperature of iron from the color of light it emits. The PHENIX physicists used a new technique invented by Akiba to do so.

Akiba explained, “It is a very challenging measurement because there are many background, or noise, photons produced in the collisions of gold ions at RHIC. At high energies, photons and electron pairs are basically the same thing – just different forms of electromagnetic radiation. So instead of measuring photons, we measured electron pairs, which have much less noise, to determine the quark-gluon plasma temperature.”

Also, Akiba is being honored for measuring two heavy quarks called “charm” and “bottom” quarks, which are produced in RHIC collisions and are a very useful probe of quark-gluon plasma. Akiba and colleagues found that heavy quarks lose a significant amount of energy and flow with the medium within the quark-gluon plasma. Akiba explained, “In theory, it was expected that the heavier a quark, the less energy it loses, and the heavier it is, the less able it is to flow, so these findings were surprising.”

Akiba was also cited for discovering large enhancements of electron pairs in the low-energy region in RHIC collisions. The cause of this enhancement has not yet been determined. Akiba credits Alberica Toia, previously of Stony Brook University and currently at CERN, the European Organization for Nuclear Research, for conducting most of the analysis work for this research.

Akiba earned his undergraduate degrees in 1982 and 1984, and his doctorate in 1988, all from the University of Tokyo. He was a research associate at the University of Tokyo’s Institute for Nuclear Study from 1988 to 1997, and at the High Energy Accelerator Research Organization in Tsukuba, Japan, from 1997 to 2003. After briefly serving as a senior research scientist at RIKEN in Wako, Japan, in 2003, he became RIKEN’s vice chief scientist, a position that he still currently holds. He has also been the experimental group leader of the RIKEN BNL Research Center at Brookhaven Lab since 2008. In addition, he is the project manager of the VTX detector of PHENIX, as well as a deputy spokesperson for the PHENIX collaboration.