Colossal Conducting Variation at the Nanoscale 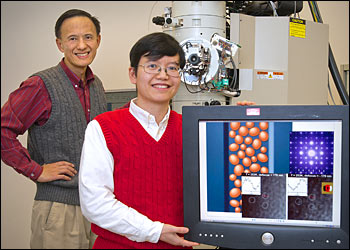 Lead author Jing Tao (right) with Group Leader Yimei Zhu show their findings in front of the transmission electron microscope used to identify nanoclusters forming at particular temperatures in a magnetic field that are essential to the emergence of colossal magnetoresistance.

UPTON, NY — Researchers at the U.S. Department of Energy’s (DOE) Brookhaven National Laboratory and the Universidad San Francisco de Quito in Ecuador have found that, at just the right temperatures, nanoclusters form and improve the flow of electrical current through certain oxide materials. This work could be used in a number of industrial applications including spintronics, which exploit electrical and magnetic properties for use in solid-state electronics. The researchers’ findings appear in the Proceedings of the National Academy of Sciences during the week of December 12, 2011.

The unusually large variation in resistance to the flow of electricity in the presence of a magnetic field observed in some oxide materials is a phenomenon known as colossal magnetoresistance. The oxides involved in this research have a specific arrangement among the atoms that make up the material. The scientists found that, at particular temperatures in a magnetic field, nanoclusters about 10 atoms in size formed in these materials. These nanoclusters had electronic properties different from the material’s whole and were essential to the emergence of colossal magnetoresistance.

“Until now, scientists could only speculate that nanoclusters play a critical role in colossal magnetoresistance. Our work pinpointing the nanoclusters with improved conductivity is a big step in understanding this phenomenon and the fundamental laws of materials,” said Brookhaven physicist Jing Tao, lead author on the paper.

“As we cooled samples from room temperature to about 250 Kelvin (-23 degrees Celsius), we found that colossal magnetoresistance emerged as nanoclusters formed and became most dense,” Jing explained. “We saw the nanoclusters form and connect a path in the crystal, and the whole material became conducting.”

These nanoclusters were thought to only act as insulators with different magnetic properties, Jing added. This work shows that these properties are temperature dependent. In the presence of a magnetic field and at the proper temperature, the nanoclusters become conductive and ferromagnetic to allow colossal magnetoresistance to occur.

For this research, scientists at the Universidad San Francisco de Quito in Ecuador grew crystals of manganite — manganese oxide doped with varying quantities of calcium and the rare-earth metal lanthanum. Scientists at Brookhaven then bombarded the crystals with beams of high-powered, negatively charged electrons using the Lab’s Transmission Electron Microscope to study their properties. As the electrons passed through the crystal, the scientists analyzed their paths and energy levels to determine properties such as structure and magnetism, as well as the nanoclusters’ role in the emergence of colossal magnetoresistance.

“In the future when we learn more about the nanoclusters — for example, the details of their structure and whether they are charged — we can begin to improve the electrical performance of these materials.”

The work completed at Brookhaven Lab was supported by DOE’s Office of Science. Authors of the paper include Tao, Qing Jie, Marvin A. Schofield, LiJun Wu, Qiang Li, and Electron Microscopy and Nanostructure Group Leader Yimei Zhu, from Brookhaven Lab, as well as Dario Niebieskikwiat from the Universidad San Francisco de Quito. Additional scanning experiments were conducted at the University of Illinois.