The following news release is being issued today by the Science and Technology Facilities Council of the UK. It describes a prototype of a new kind of particle accelerator with applications for physics research, medical therapies, and other fields. The accelerator was developed in collaboration with physicists from the U.S. Department of Energy’s Brookhaven National Laboratory. For more information about Brookhaven’s role in this research, please see the accompanying feature article. 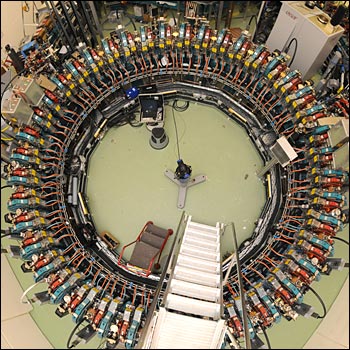 Landmark technology that could revolutionise cancer therapy and pave the way for cleaner, safer nuclear reactors in the future, has been published in Nature Physics today, 8 January 2012. The pioneering EMMA (Electron Model for Many Applications) accelerator is a prototype for a brand new type of particle accelerator that will massively impact fundamental science by changing the way such accelerators across the world are designed and built in the future. The paper reports the first experimental results from EMMA, confirming the proof of principle underlying its technology.

Today’s existing accelerators have already had a profound beneficial impact upon society, with their wide range of uses in industry, medicine and basic science – including development of the MRI and X-rays. But they operate on principles developed over 50 years ago and their potential is limited by their sheer size, complexity and cost.

EMMA represents a breakthrough. Based on innovative concepts never tried before, EMMA’s technology is more compact, cost effective and operationally simpler, allowing the more widespread use of accelerators to tackle some of the most difficult problems facing society. The beneficial role of nuclear article therapy of cancers, particularly in the treatment of radiation-resistant and awkwardly sited tumours, is well known. It is therefore hoped that in the future this technology will allow hospitals to implement a newer and more effective form of beam therapy to help cure some of the most difficult cancers.

Engineered and constructed at the Science and Technology Facilities Council’s (STFC) Daresbury Laboratory, EMMA was designed by an international consortium of scientists as part of the CONFORM project, which includes the Universities of Manchester, Oxford, Surrey, Imperial, Brunel, Liverpool and Huddersfield, STFC, the Cockcroft and John Adams Institutes, as well as a number of international partners which include the Brookhaven National Laboratory and Fermilab in the US, and TRIUMF in Canada. 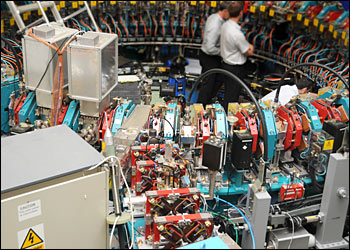 EMMA’s ground-breaking concept is based on a ring of magnets which use their combined magnetic field simultaneously to steer and focus the electron beam around the machine. The strength of this magnetic field increases steeply as the beam spirals outwards while it is accelerated to 20 million electron volts around the ring. Due to the strength of the magnetic focussing, the displacement of the beam as it accelerates and spirals around the ring is much smaller than in any equivalent accelerator. As a result, EMMA’s ring of magnets is much more compact and it is easier to accelerate the beam.

The electron beam that is injected into EMMA is generated by another accelerator system operated by STFC at Daresbury, known as ALICE (Accelerators and Lasers In Combined Experiments), which is also based upon a mode of operation that drastically minimises the power needed to accelerate the beams.

Professor Susan Smith, Director of ASTeC at STFC's Daresbury Laboratory said: “It is fantastic news that EMMA’s concept has now been proven and published in Nature Physics. We’ve demonstrated for the first time a new type of particle accelerator that could be used in many different areas of our lives, and one which will hopefully allow for more widespread use of accelerators to tackle some of the most challenging problems facing our society. Better, cheaper accelerators could, in the future, increase access to improved medical treatment, provide better security scanning and create new solutions to tackle the energy crisis – as well as providing technology for the next generation of physics experiments. STFC has provided significant support for the construction of EMMA and now supports the experimental commissioning and characterisation of the accelerator through ASTeC.”

The University of Huddersfield’s Professor Roger Barlow, Leader of the CONFORM project and co-author of the Nature Physics paper said: “The exploitation of particle accelerators has expanded way beyond the confines of fundamental physics into many areas of science, technology, manufacturing and medicine, and EMMA is one that could now define the way forward for this kind of particle accelerator across the world. Experimental work is ongoing, with more detailed studies being undertaken on some of the novel aspects of the machine and the clear next step is to begin to apply this technology to the range of possible applications; while this will require a large amount of effort, it is expected to bring with it a range of new challenges and thus, new solutions.”

Dr Andrzej Kacperek, Head of Cyclotron at the Clatterbridge Centre for Oncology said: “From its origins, the development of the EMMA project has been pursued with an awareness of its role in particle therapy of cancers. Although enormous improvements have made in radiotherapy techniques using X-ray beams over last decades, the advantage of particle beams remains undiminished. EMMA’s technology reflects the need for a compact design, both in size and weight, that clinical centres require, with the ability to be used with a gantry system, which transports the beam from any angle around the patient, and the sophisticated beam control necessary to allow ‘painting’ of the tumour volume.”

The paper can be viewed online at the Nature Physics website.

Quotes from all CONFORM partners are available on request from STFC. Images of the EMMA accelerator at STFC’s Daresbury Laboratory are available upon request.

EMMA is a project to build a non-scaling FFAG (Fixed Field Alternating Gradient) accelerator at STFC's Daresbury Laboratory, as an addition to the ALICE programme. Funding for EMMA was granted to a UK consortium, CONFORM, from April 2007, by the British Accelerator Science and Radiation Oncology Consortium (BASROC) and a grant from the Research Councils UK (RCUK) Basic Technology programme. EMMA's technology suggests a range of potential applications including charged particle cancer therapy, accelerator driven reactors and particle physics (e.g. neutrino factories). EMMA is a small electron model designed as a proof of principle.

The experience gained in the development and operation of EMMA's new technology will inform the design and eventual construction of a prototype proton/carbon ion accelerator for medical applications (PAMELA). In addition, an extensive parallel R&D programme will evaluate the potential of the new accelerator technology as proton drivers for applications in scientific and technological fields as diverse as energy and environment (e.g. accelerator driven sub critical reactors, waste transmutation), materials research (e.g. advanced neutron and muon sources for studies of the structure and dynamics of materials), and fundamental physics (e.g. the neutrino factory).

ASTeC is the UK's centre of expertise for accelerator science and technology.

ASTeC studies all aspects of the science and technology of charged particle accelerators, ranging from large scale international and national research facilities through to specialised industrial and medical applications.

Our staff pursue world class research and development programmes on behalf of STFC and it is also a partner in the Cockcroft Institute with the Universities of Lancaster, Liverpool and Manchester. Additional collaborations include John Adams Institute, other HEIs and international Laboratories.

The Science and Technology Facilities Council is keeping the UK at the forefront of international science and tackling some of the most significant challenges facing society such as meeting our future energy needs, monitoring and understanding climate change, and global security.

STFC is one of seven publicly-funded research councils. It is an independent, non-departmental public body of the Department for Business, Innovation and Skills (BIS).