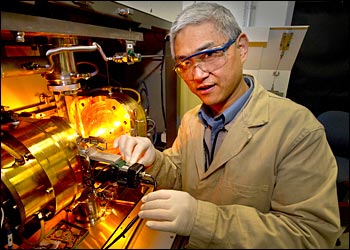 UPTON, NY — Genda Gu, a physicist at the U.S. Department of Energy’s Brookhaven National Laboratory, has been named Fellow of the American Physical Society (APS), one of the world’s largest organizations of physicists. Election to APS Fellow is limited to no more than one half of one percent of its total membership in a given year, and this honor indicates recognition by leading scientists for singular contributions to physics.

The APS will honor Gu at its March meeting “for outstanding contributions to the synthesis of high quality single crystals for experimental research, particularly the high Tc superconducting cuprates.”

At Brookhaven Lab, Gu pioneered the growth of a number of the largest high quality single crystals in the world, producing dynamic superconducting materials that offer extreme efficiency by transmitting electric current without any resistive loss. High-temperature superconductors are especially attractive because they require less extreme cooling to operate and can be used across a great range of advanced technologies.

Single crystals, like those developed by Gu, tend to display better superconducting properties than the more easily made polycrystalline structure alternatives. But they are notoriously difficult to synthesize, taking over a month of precise experimentation to complete, which is part of what distinguishes Gu’s work.

“These single crystals are becoming a vital necessity in both scientific research and new high technology innovation, and are at the heart of success in the condensed matter experimental physics field,” Gu said.

Gu received his B.S. in metallic materials science from China’s Hefei University of Technology in 1982. He received both his M.S. and Ph.D. in that same discipline from China’s Harbin Institute of Technology (HIT) in 1985 and 1989, respectively. Gu went on to complete post-doctoral and fellowship research at institutions in China, Japan, and Australia over the next decade before joining Brookhaven Lab in 2001 as an associate physicist in the Department of Condensed Matter Physics and Materials Science. He currently works as a physicist at Brookhaven and since 2005 as an adjunct professor at Stony Brook University.